So a funny thing happened on the way to judging Caption Contest 89. We were moving, and of course a massive snow storm hit that day (-27 that night). That delayed everything, including our internet installation. When that finally got done and we were settled in enough for me to have time to go through all the entries, I was pretty tired. I did my usual thing, collecting all the ones I thought were potential winners, in a plain text document. By the time I was done I had to get up to make dinner.

Afterwards my mother-in-law (did I mention we had relatives visiting, arriving at the airport two hours after I touched down from my week long visit to Baton Rouge? In the middle of a move from one town to another? During a massive snow storm? Yeah.) asked if she could use the computer to check her Yahoo Mail. She's on a Dell at home and I have a Mac, but no big deal because a browser's a browser, right?

I sat down late that night after she was done and stared at my shiny, empty desktop. Every document had been dutifully closed, including my unsaved text file with all the finalists.

Anyway, love her to death, but I just didn't have the heart to go back through and re-do it all. Which is a long way around saying I'm sorry for the long delay, and here are your Finalists.

Particular noteworthy are Frankie and HalLoweEn JacK for referencing particularly funny random panels from the past. And to Count Libido for what I think was the most out-of-the-box response that never would have occurred to me, and is especially funny given the plethora of Hulks wandering around the Marvelverse these days.

However, your overall winner is not one of those, but rather from ... Gero! 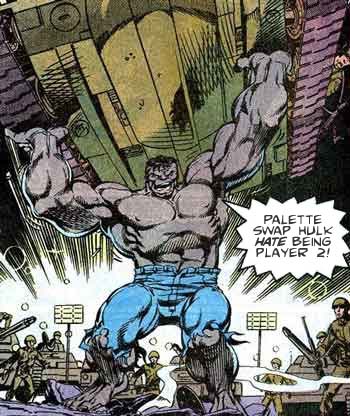 This is a very obscure reference, but for all us old fogies who used to be stuck playing cheap-ass computer games, it really struck a note. Well done, Gero, let me know what you'd like for your prize!