Welcome all my friends to the show that never ends! We're so glad you could arrive, look inside, look inside!

Or failing that, come up with the funniest replacement dialog for this random comics panel from "Captain America": 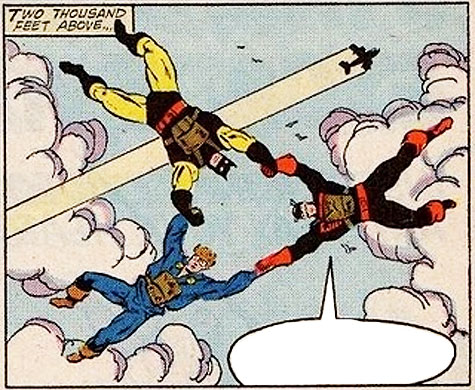 Otherwise, the rules are simple — as many entries as you like (within the bounds of good personal editing), appropriate for no worse than a late-night broadcast TV show, by next Monday. The winner receives their choice of a) any item they like to be included in HeroMachine 3; b) any portrait they like to be included in HM3; or c) any subject (within reason) for a Sketch of the Day style custom black and white drawing.

(All of those various Captain America iterations, this specific image, the term “super-hero”, and any ideas you have ever had or might have in the future, along with the contents of your sock drawer, are all © Marvel Comics.)