I'm sure "The Enchanted Dagger" would tip his cap to the guy who designed his costume, only he doesn't have a cap. Or a belt. Or shoes, gloves, or anything else but long red underwear in what is surely a front-runner for Laziest Costume Ever: 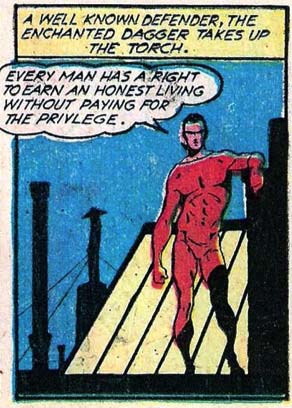 At least he has the comfort of wearing footie pajamas. Those things are awesome. I wonder if he also has the button-up rear-end flap?

Holy crap, I can't believe I wondered that. Or published it. Gulp.

I tried to imagine an even more generic, uninspired, lazy outfit, but I drew a blank. The closest I could come was Namor's scaly briefs, but at least he had winged feet, which you have to admit is thinking outside the box for a guy who lives underwater.

You'd think with a name like "The Enchanged Dagger", a guy who runs around with -- you guessed it -- a giant enchanted dagger would have someplace to put that Enchanted Dagger. But unless he's sporting some deep pockets in those skin-tight underoos, I'm not seeing a sheath or anything like it.

If it weren't for that sad little domino mask, he'd basically be a crazy person running around in his longjohns. Which, come to think of it, makes him fit right in with the other members of the super-hero fraternity ...

23 Responses to The No-Effort Costume