I was really impressed with the entries for Character Contest 46 (Clerics), you all did an outstanding job. As a result, we have a lot of Finalists to go through, so I want to get right to it.

Before I do, though, we have some unfortunate business to address. I was unable to count the following entries due to bad links that went to a jump page instead of directly to the image:

Remember, for ImageShack or PhotoBucket, you want the link listed in the "Direct Link" box over on the right or left, and NOT the URL from the address bar of your browser. I couldn't even get PicasaWeb to load this morning to tell you want link to use, but I think the way to do it there is to right-click on the image and use "Copy Image Location".

And now, on to our Finalists!

First, I thought Watson Bradshaw's "Agnostic Avenger" was a hoot: 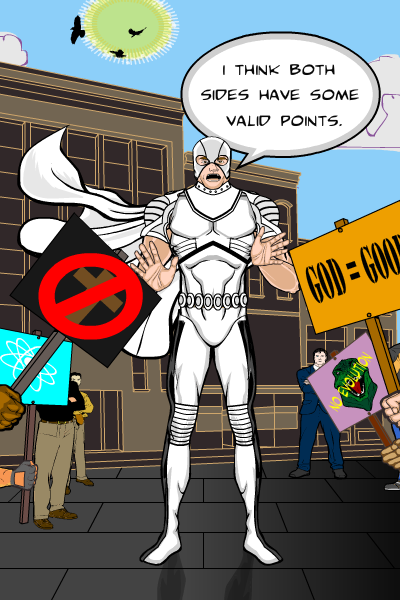 I can't even imagine how long it took VonMalcolm to do "The Devil's Druidess": 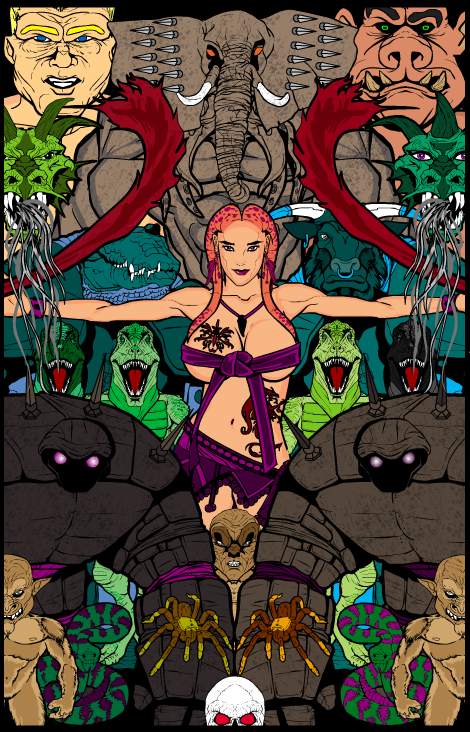 Timespike's "Fatewalker" combines mysticism and cool for an exceptionally strong image. The Aztec calendar in the back is a great element as well. 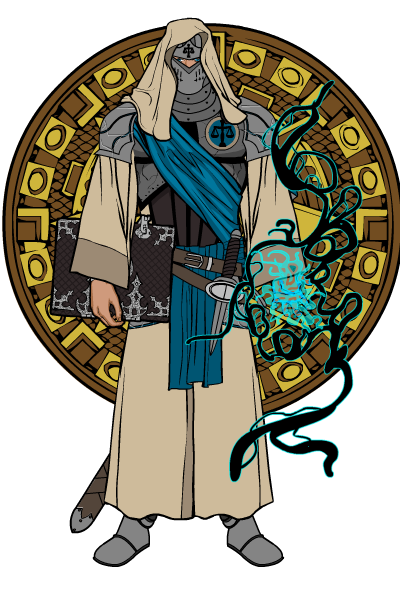 Technically Spidercow2010's "Luriel" doesn't count for the win because the character is an angel, not a cleric, but whatever you call it, the image is kick-ass. The halo, wings, and outfit choices are all spot-on. 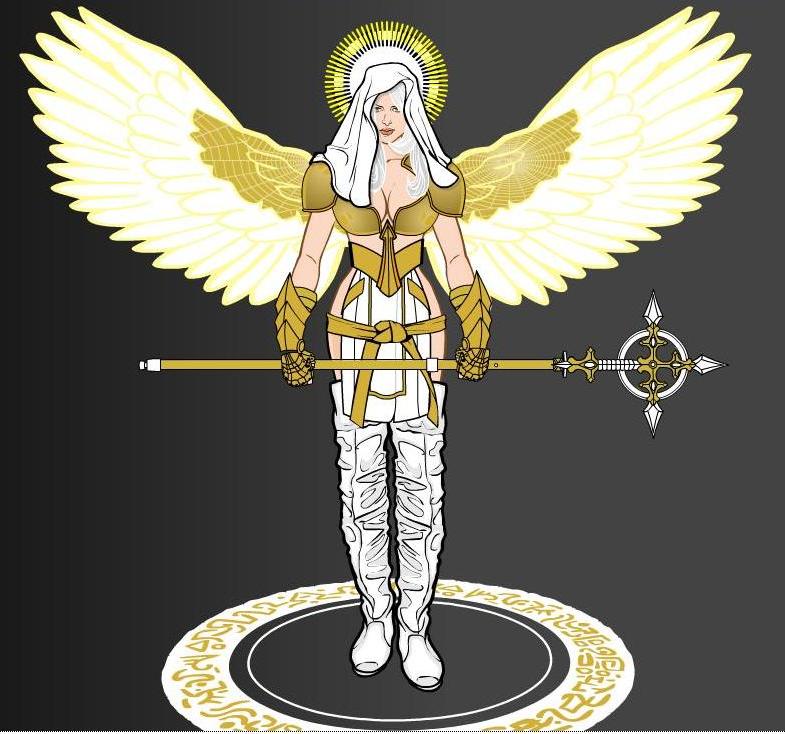 I liked Rhinoman's "Brother Nevil" for its simplicity and cohesion. He looks really, really mean. 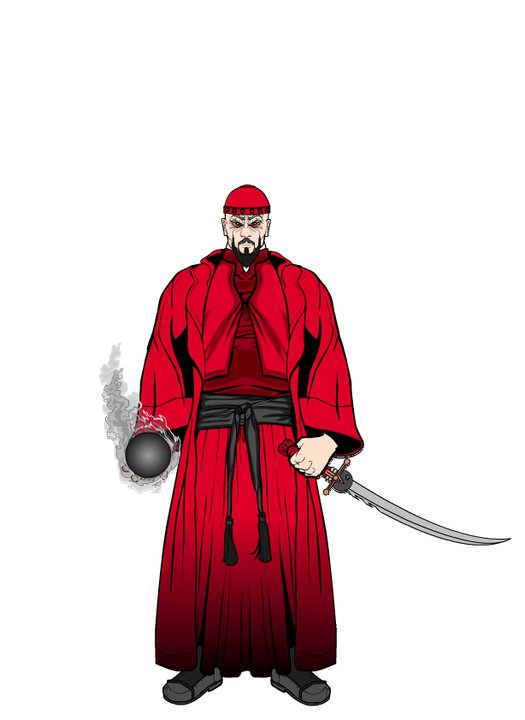 MLS submitted "VaRiel", and I love the sense of motion he injects into the image. The character concept is tight and very well executed in every detail.

I don't think I need to say much about Martian Blue's "Brother Gabriel" image, it pretty much speaks for itself: 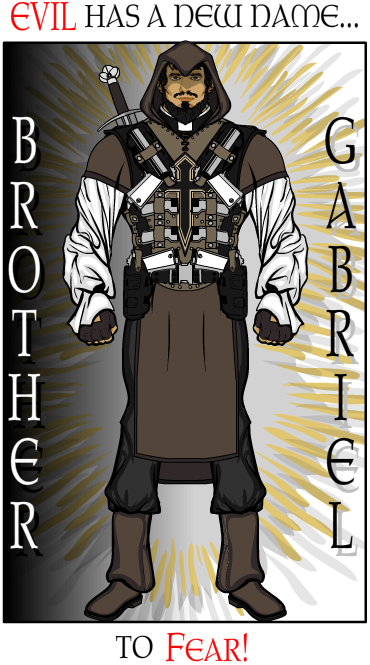 Legatus' "Battle Nun" will hopefully appear one day as a "Battle Pope" sidekick. 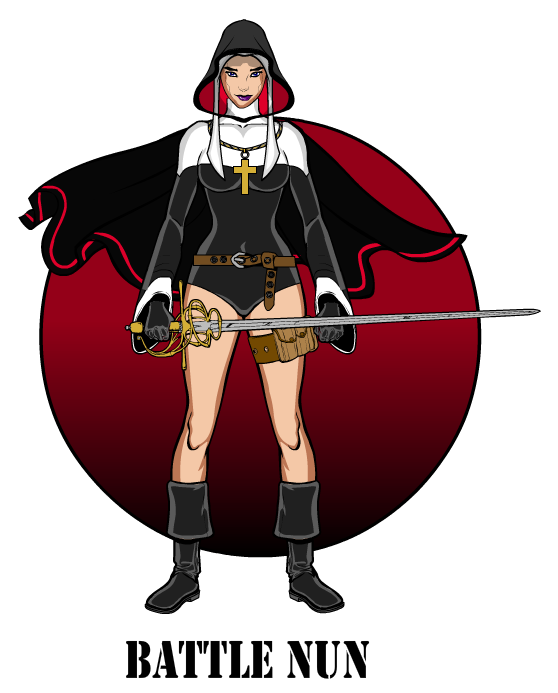 I picked Kyle's "Raj" mostly for the belt buckle and vest, which I think are simple yet good. I also really liked the way he sized up the right hand, making it appear closer to the viewer. That's a subtle but very effective technique of perspective. 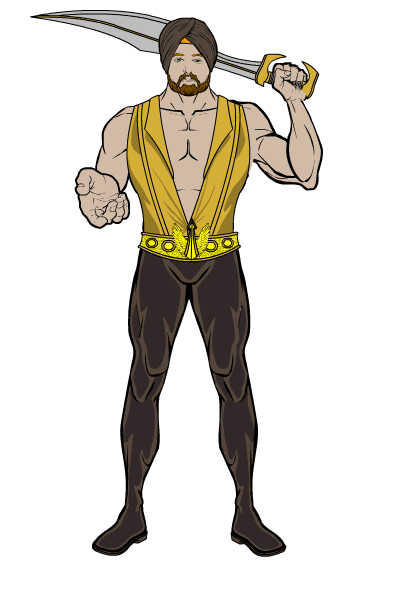 It's hard to believe Jenna's "Onati Tansis" is her first contest entry ever. I hope we get to see lots more! The faceless acolytes, the great use of greens throughout, the censer, the outfit, and the pose are all just great. 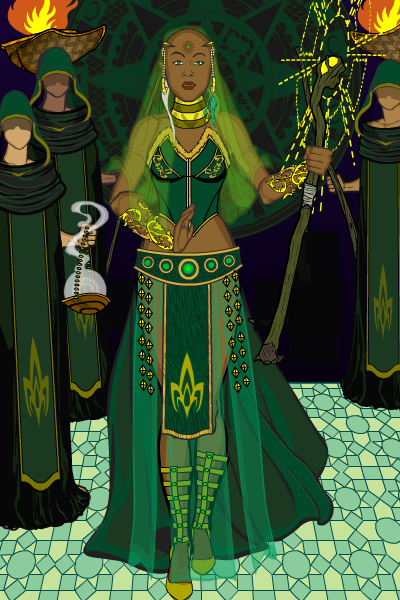 I was trying to keep each person to no more than one Finalist designation, but I couldn't resist including two from Haxxx, starting with the very simple but cool "Witch". I think it's the leaves swirling around the staff head that really do it.

Also from Haxxx is the aptly named "Priest", although he could just as easily be a Highland warrior. I love the tats, the hammer, the hair, and the beard. Just a very cool, savage guy.

I had a hard time picking just one from Gargoyle323 -- I had a total of four of his entries in the preliminary cut ("Monk of Arms", the nice tribute to his reverend Rob who recently passed away, and "Sister Stryker"), but I finally settled on "Brother Bluud and the Sinn Sisters" because of the great group outfit design. 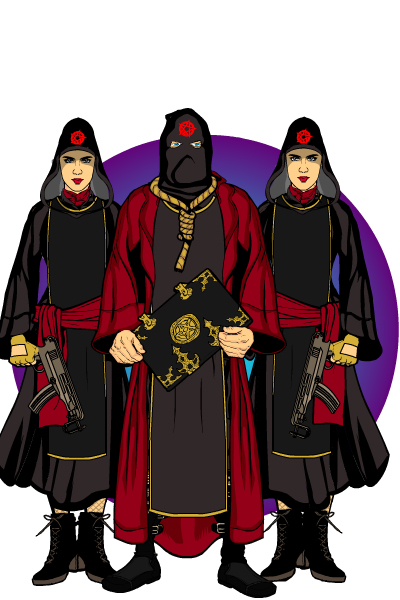 Strangely, there were two intelligent gorilla characters submitted, but I really loved the story behind Galactic Ketchup's "Reverend Monkey", with the stake made from the burned altar and the hammer he used to build the church in the first place. Very cool example of a good character made great by a solid story. 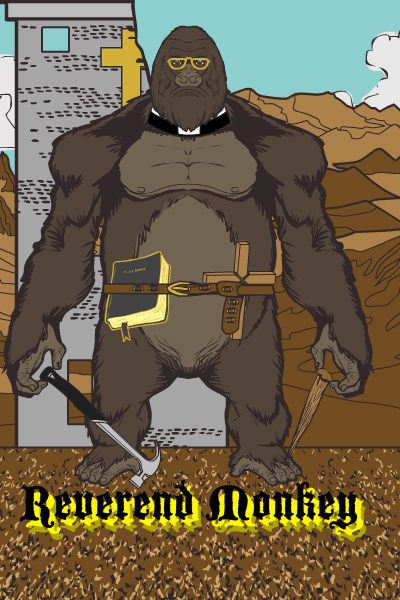 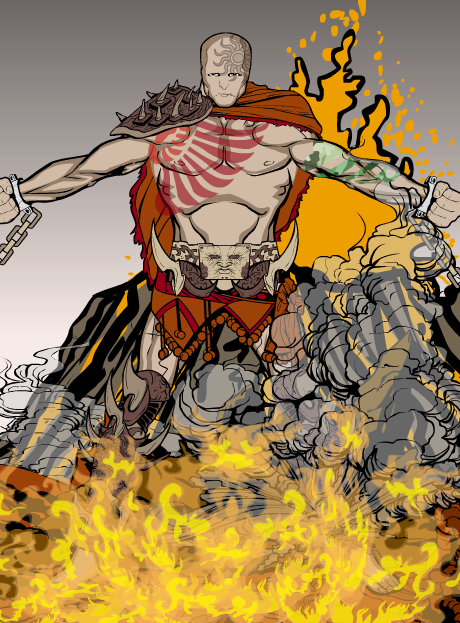 I also picked two from DiCicatriz. I have a weakness for the guy's designs that's almost Imp-like. First up is "Revenant", which I love. I think in a lot of ways it's the most "clerical" of the submissions this week. The glowing hand, reinforced by the use of the new two-tone gradient masked onto the robes, is fantastic. 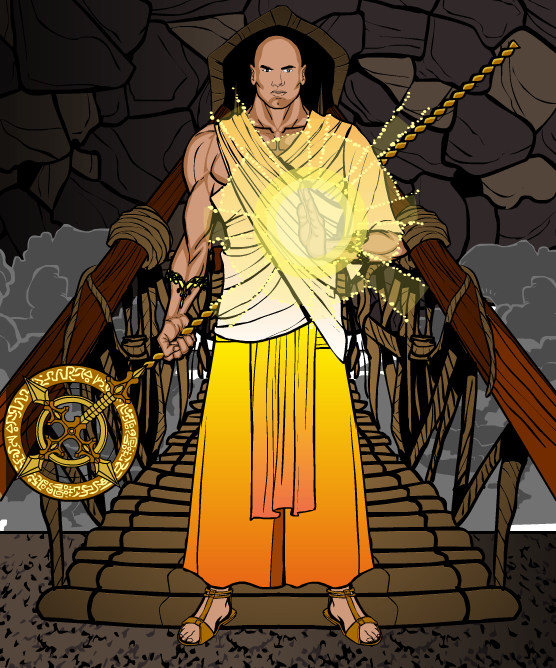 The other DiCicatriz entry is "Ciruja", which I think is the best "Dark Priest" style entry. Love the blood effects on the hands. 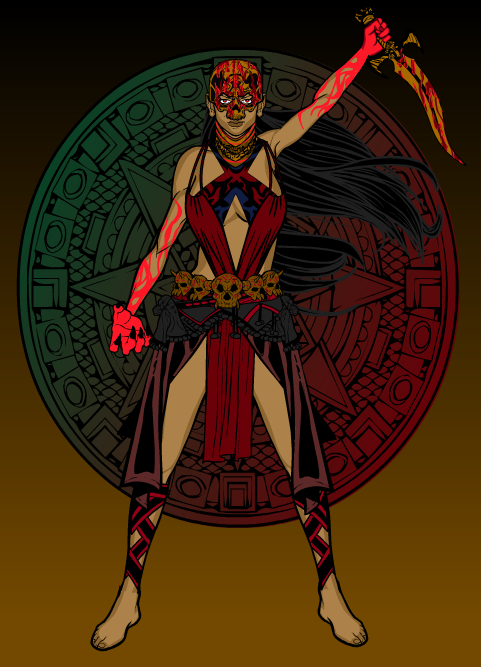 While Danny Beaty's "Nun Butt, the Brave" made me laugh, I ultimately went with his "Deacon Justice" instead, as I think it's a great Golden Age type of character. 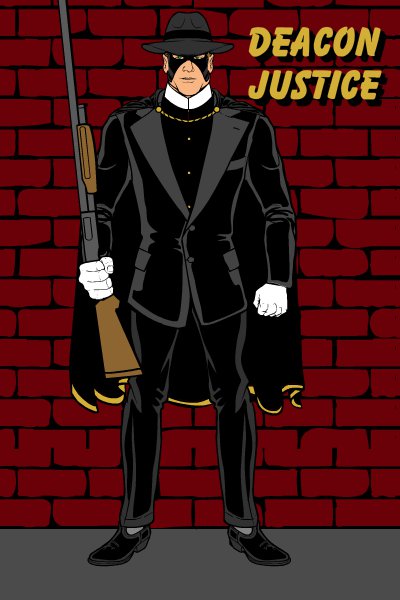 Cliff's "Lavanah" is good in general, but what I really wanted to point out was the fantastic use of the moon as the head of her mace. What a great idea! 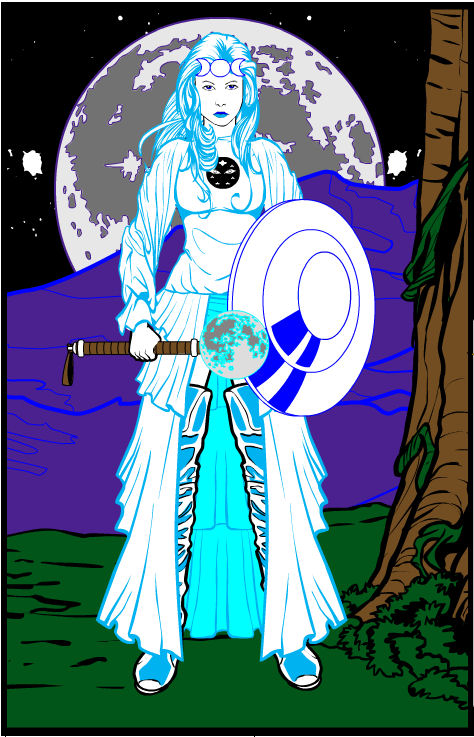 Blue Blazer's "Father Devlin" is just a rock solid Old West Robot Preacher, and what could be better than that?! 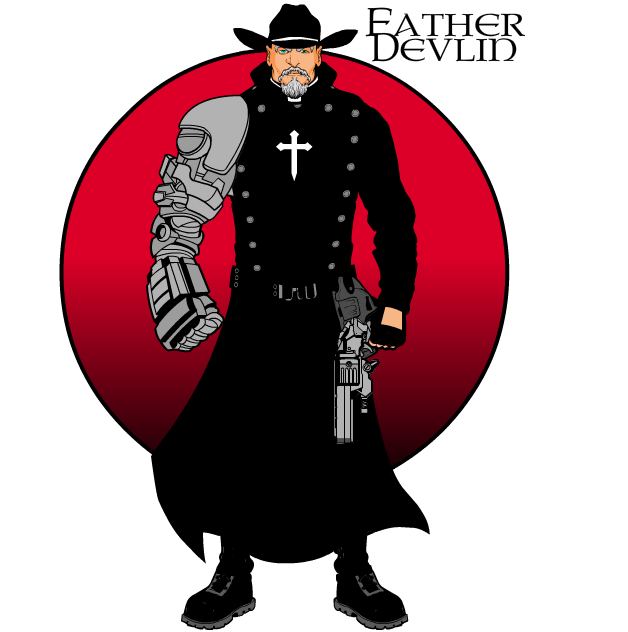 Asder figured out his posting problems, I think, and had two nice ones. I chose "Death Angel" to profile here as I think the setting is fantastic, but I also liked "The Spiritist." 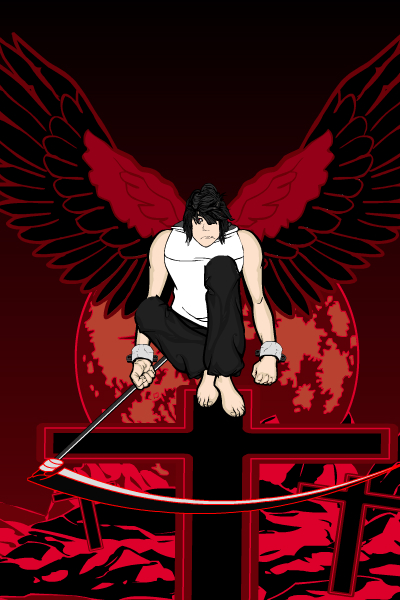 Anarchangel also has two entries, starting with "The Shaman": 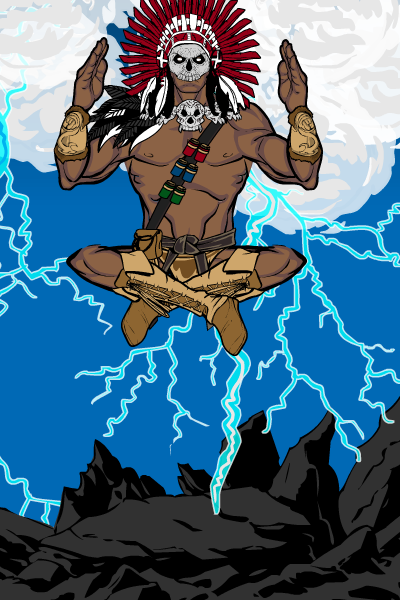 And also "Flare", who is rocking that outfit. 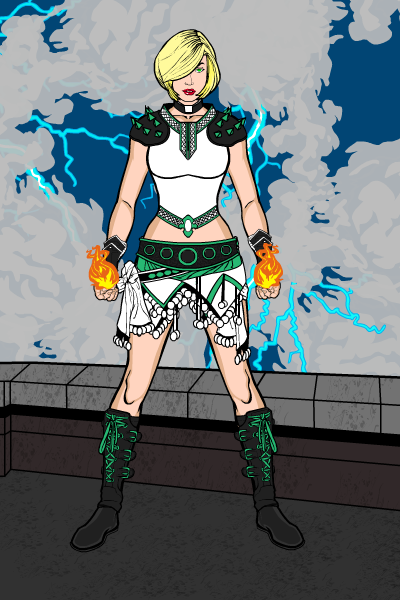 The final Finalist is Alex, with "Nomad", a great, simple, streamlined wandering monk type of guy. Love the tats on the left arm and the floating candles.

Now, having looked through all of those great entries out of the much larger number of also-great entries, I have to pick one overall winner. I have to say my favorites out of the bunch in terms of doing the best job of executing the theme of "Cleric" are Timespike's "Fatewalker", Martian Blue's "Brother Gabriel", Jenna's "Onati Tansis", DiCicatriz's "Revenant", and Blue Blazer's "Father Devlin".

But since there can be only one, I am going to go with ... Jenna as our overall winner! Congratulations, Jenna, you knocked it out of the park with your very first contest, that's impressive! The combination of the entire scene, the consistent colors, and the great costuming choices along with the pose are what ultimately swayed me. You win your choice of either any item you like or a portrait to be included in HeroMachine 3, OR you can choose a subject for a black and white "Sketch of the Day" style illustration from yours truly.

Thanks again to everyone who entered, and congratulations to all our Finalists!

I'll post the next contest in a few hours after these folks have had a chance to bask in their glory for a while.