Slippers are great. I wear them every day in the morning with my comfy robe while I sip my coffee and look for super-hero stuff on the Internet to make fun of. But here's the thing -- I don't go out to fight crime in my pajamas and slippers! Apparently, though, if I were trained in the martial arts I would know how foolish that stance is, because goodness knows Iron Fist can rock the PJs look: 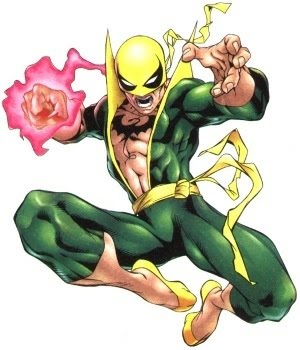 Those are slippers, folks. Yellow slippers. Combined with skin-tight Capri pants, a plunging man-region-length neckline, and the biggest popped collar this side of a frat house, and you've got something out of a disco nightmare.

To be fair, Iron Fist came of age in the 1970s, when we as a nation lost our collective fashion minds. My best theory is that an alien culture tried to destroy us by eating our brains through the techno-virus known as "Disco Music". Kooky conspiracy theory, you say? Well look at THIS evidence, I say! 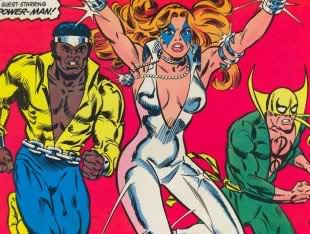 Now I ask you, what possible explanation could there be for three such horrendous costumes at the same time other than alien mind-virus invasion?

(All character and images ©Marvel Comics.)