We appear to be on a bit of Jack Kirby kick this week, so let's take the King's designs into real life, shall we?

Let's take a deeper look, shall we? 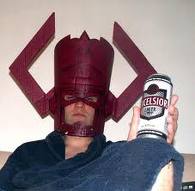 It's big. It's bulky. It won't fit through most doorways. How the heck are you supposed to move in this stuff? There are enormous horns, gigantic tuning forks, even one guy with an enormous video camera mounted to his noggin. Just maneuvering around the every day obstacles of life would be a hassle, assuming you don't live in the god-sized Asgard. 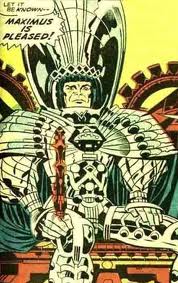 Kirby armor is huge and bulky and must weigh several metric tons. I can't imagine getting out of a chair, even -- which apparently Maximus can't either, as he's still moribund. Come to think of it, all your furniture would have to be triply reinforced and made of adamantium just to keep your shiny metal butt from smashing into the floor. Let's not even think about how you de-suit go to the bathroom in under three hours. 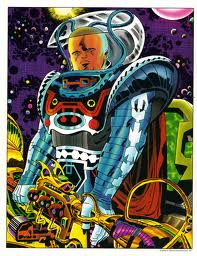 Kirby outfits have doo-dads everywhere. Hips, chest, nipples, crotch, all along the belt, the outer thighs, inside the armpits, you name it and there's a button or lever or switch or tape recorder or something you have to fiddle with. I'd be in a constant panic thinking that if I accidentally scratch where it itches I might set off a nuclear bomb or something.

The Name
I think this about says it all: 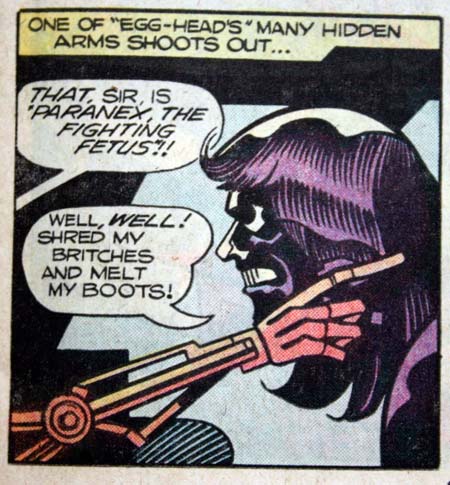 It sounds like I'm harshing on Jack Kirby -- and I am a little -- but it's the same goodhearted ribbing I give my friends, born of respect and admiration. The guy was a total stud. But if you spend any time at all looking through particularly his later works, like his run at Pacific Comics or the New Gods or the Inhumans or whatnot, a lot of these visual shortcuts start to jump out at you.

I have to say, I'd be curious to talk to the costume designers for the "Thor" movie to find out how they kept the Kirby horns on Loki from dragging the actor's head to the ground. Those helmets look incredibly heavy and awkward to me.

But at the end of the day, in the real world, I'd most hate the bewildering array of controls and doohickeys that festoon a classic Kirby outfit. I just know I'd fart and destroy downtown.