In a bit of a changeroo, I'm substituting another Character Contest for the usual Caption Contest this week. I was talking with my buddy John Hartwell (of the epic Kirby Villain Sketch of the Week on his Facebook page) about Jack Kirby this morning, and we started laughing about how when the King was completely unedited like he was later in his career, the results were a little ... odd sometimes. For instance, his New Gods sometimes went off the rails a bit, like with "The Black Racer".

Which led to a comparison with "The Silver Surfer" (image from the immortal Fred Hembeck): 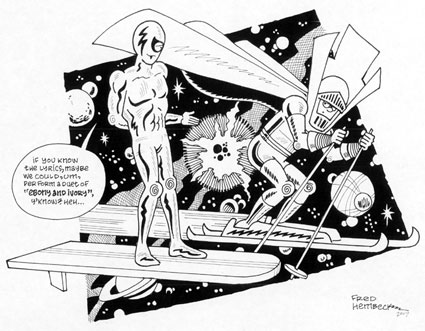 Which made us wonder, what other color slash mode of transportation characters Kirby might have come up with had he the time.

Which leads us to today, and your Character Contest for the week: Come up with the best Jack Kirby style character combining a color and a mode of transportation. His classics are the Silver Surfer and the Black Racer, and alternatives might be the Purple Locomotive or the Red Rocket or the Indigo Ice Skater or the Chartreuse Caboose.

I'm doing this on an "off week" because it's so specific, whereas with the on-time contests I'm going to try and stay broader and more general to give you more latitude. But I hope this will be entertaining, anyway, and a bit of a challenge to come up with something new rather than dusting off one of your creations from months ago.

The rules are the same, although the prize this time around will include the option for a "Sketch of the Day" as well as the more traditional HM3 item or portrait.

Also, I'm getting more serious about the links to your characters; last week there were quite a few I simply skipped if I couldn't get to the image directly. I hate to do that, but my connection is simply too aggravating. So be warned.