We had a huge response for Character Contest 44 - Nature, thank you all so much for the inspiring work you put into this! I had a tough time deciding on an overall winner out of the many Finalists that all had something special about them. So without further ado, here they all are, with comments on why I thought each deserved to be in the mix for the win.

If you don't see yours here, it's not that it wasn't good, I just had a lot of great ones and could only pick a handful. So keep trying, I know I speak for everyone else when I say it's a lot of fun seeing each other's work each week.

Abominal401 used shades of blue, shading, and a fantastic energy effect on his "Blue Energy" illustration that really popped. This is one of the best such auras I've seen, really nice work on that. 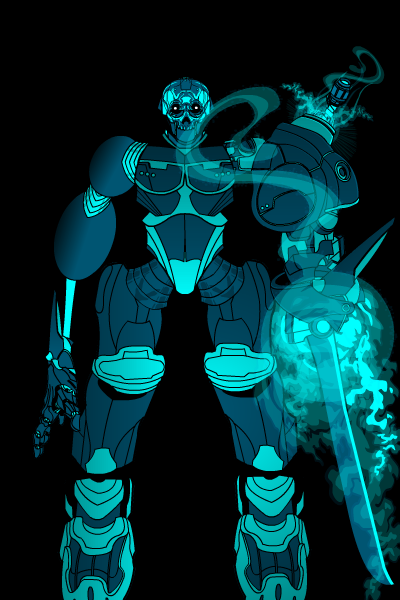 "Fang" by Alex is a simple character in concept, but very well executed. The little touches really make this one, like the feathering at the transition from the hairy arms to the fleshy part, and the claws poking out of his sneakers. It's sometimes the little things that add up to a huge impact, and this is definitely the case with this one. 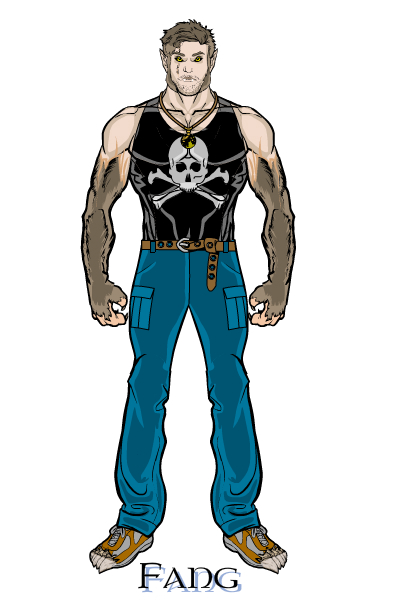 Atomic Punk's "Smoke" makes great use of a background and a pattern to sell the effect. 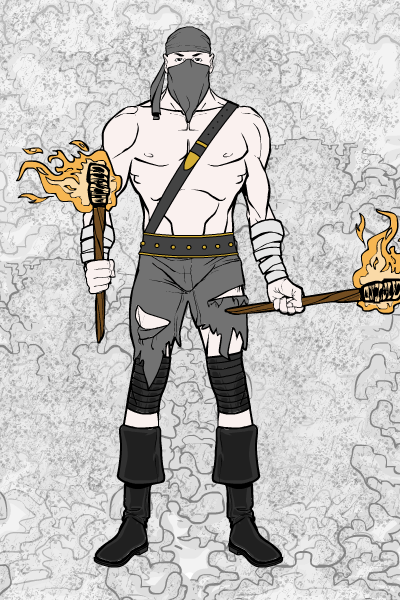 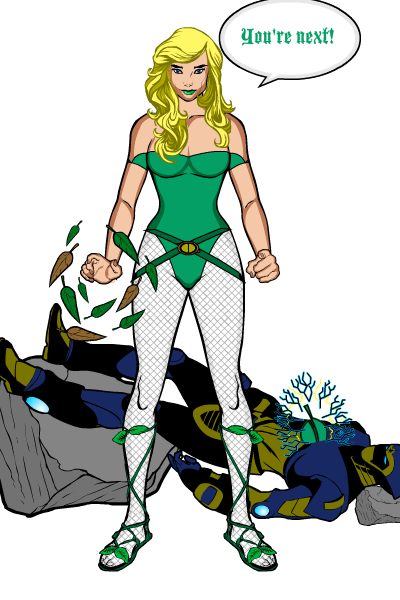 Blue Blazer had a number of great entries this week, including "Mother Earth". The pose, the clothing, the colors, and the choice of the floating rocks really nail the whole concept. Great job on this. 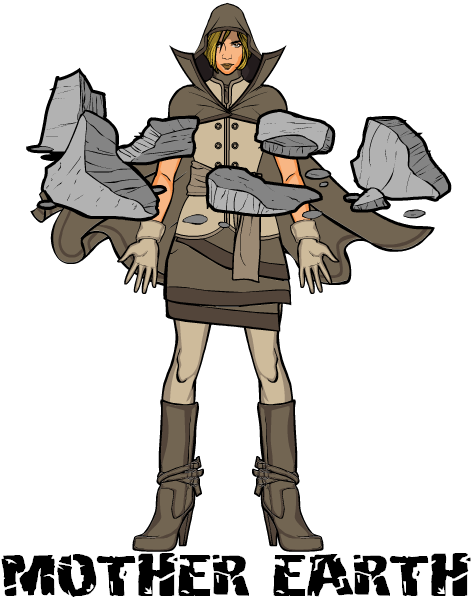 Cliff had a lot of quality entries this week as well. I picked his "Merry Mabon 2010" as a representative sample. The idea of making a card, and the way he put the image together, works very well. 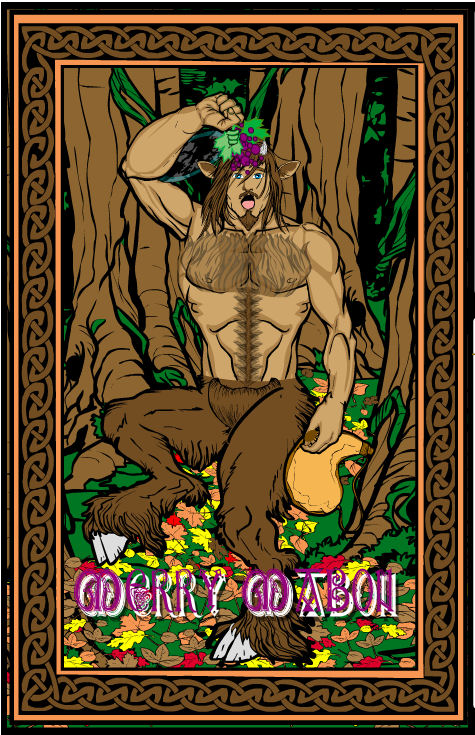 I think "Wake" is a great name for a super-powered character, and CPrime put together a fun image for the idea. 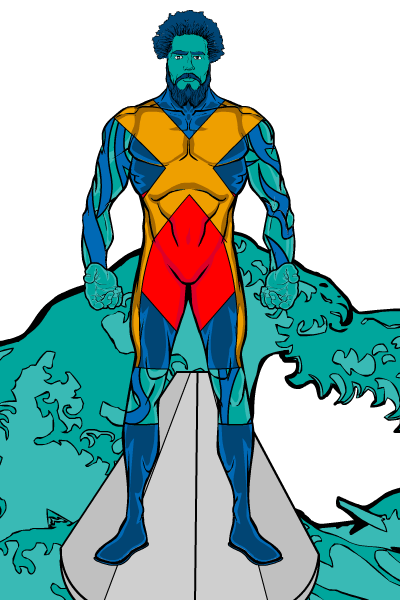 I hope I don't offend the guy, as clearly he's quite ferocious, but "Druid Bear" by Dawn is downright cute. I'd run up and give him a hug, whereupon I'm sure he'd smite me or turn me into a newt or something. 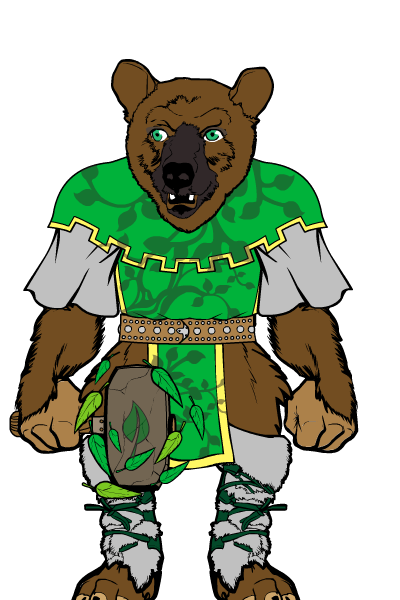 I don't often get surprised by a pose any more, but DiCicatriz pulled it off with "Hurakan". Everything works to convey the idea of movement and motion, caught up in a swirling torrent of wind. All of the supporting elements show a high degree of thought and care to make an extremely effective illustration. 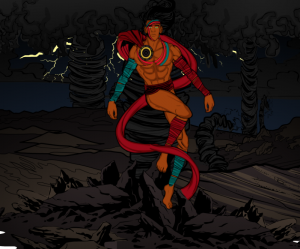 Gargoyle323 also put in a lot of exceptional entries, but I picked "Smoke" for the great "sketch" effect it achieves. Hopefully he'll explain in the comments how it was achieved, it's totally cool. 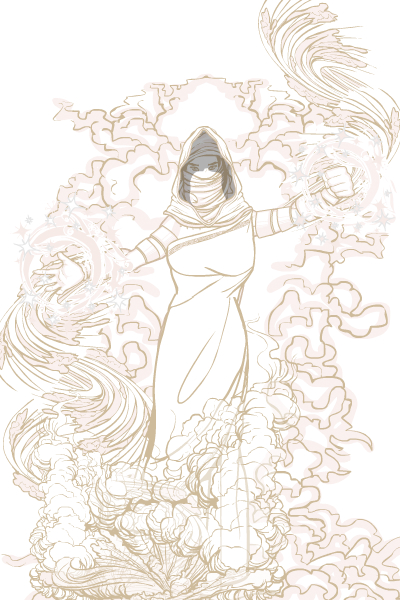 Haxxx gives us "Rat Swarm". Again, the little details make this one, from the sickly green miasma on the staff to the emaciated arms to the rat hat.

Imp comes through again with "Erl King". As usual, all of the item and color choices are spot-on to make a powerful image. 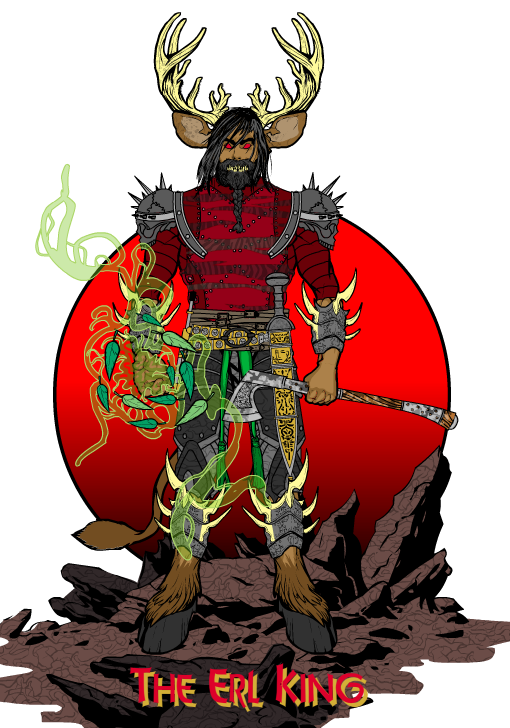 Kaldath's "Pyro Hawk" works largely due to the great fire-wing effect. I like that a lot. 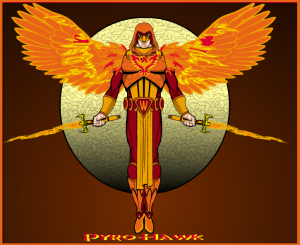 Mindless' "Soul Elm" caught my eye due to the faded-in screaming heads caught in the trunk. It's a neat concept and very well executed here. 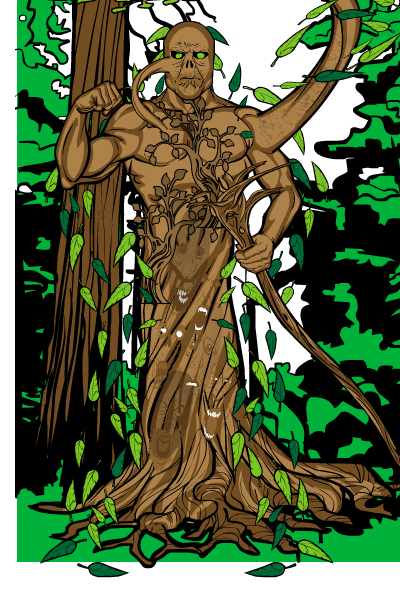 Me Myself and I is another one with multiple great entries, one of which is "Fireball". I can't say the actual outfit design excited me all that much, but the fireball and smoke effects are simply outstanding. The hair and chest logo also work really well. Awesome use of special effects on this one. 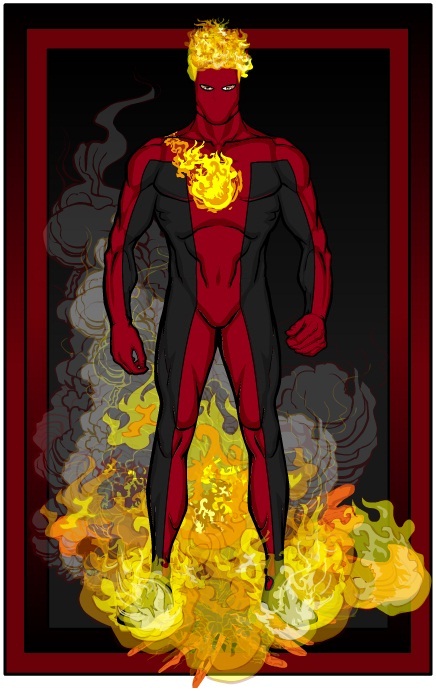 Solander had only one entry but it was a really good one, titled "Master of the Elements". He did a great job putting together the disparate pieces of the poster into a pleasing and effective whole. Nice job! 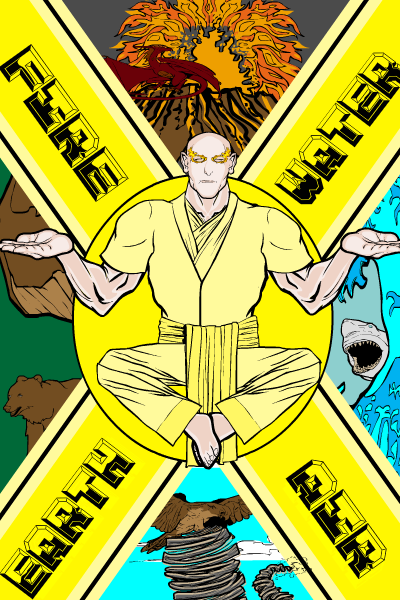 Watson Bradshaw's "Quicksand" was probably the only one that made me go "Cool!" out loud when I saw it. Of course I thought Quicksand was actually melting the soldier, which is an awesome effect, but then I thought about it and realized he was probably just dropping him into quicksand. Still cool, though. 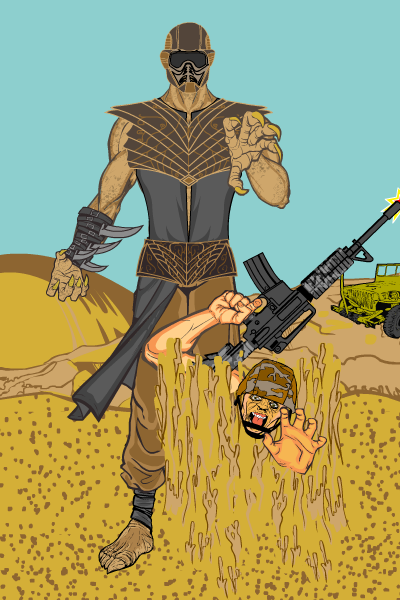 I liked each of those very much; I mean, they're Finalists for a reason. But when I sat down to go through all the Finalists to pick the winners, there were three that, for me, stood out and deserved a win. The problem is in deciding between them. So I'm not going to -- you are!

Here they are, then, the three Final Finalists for you to vote on; the winner as of the start of Monday Night Football tonight gets the overall victory and the artist's choice of a) any item, b) a portrait, or c) a "Sketch of the Week" request for a black and white illustration (like the Ms. Marvel I did for the Pop Quiz winner). Good luck!

First up (in no particular order) is Morzan's "Lady of the Lake". I love the decidedly gloomy take on the traditional myth, and the actual illustration amply supports the high concept. I love the lake reflection, colors, character design, and overall impression. Just a great illustration top to bottom. 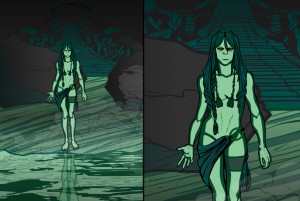 Next is Blue Blazer's "Fathom". I kind of wanted to take points off due to the non-HM font -- if that's been added in Photoshop, what else has been done? -- but it doesn't look like anything else was adjusted, plus Blue Blazer's a stand-up kind of guy, so I'm letting it slide. Plus the character's awesome. I think this would be a great Aquaman redo. 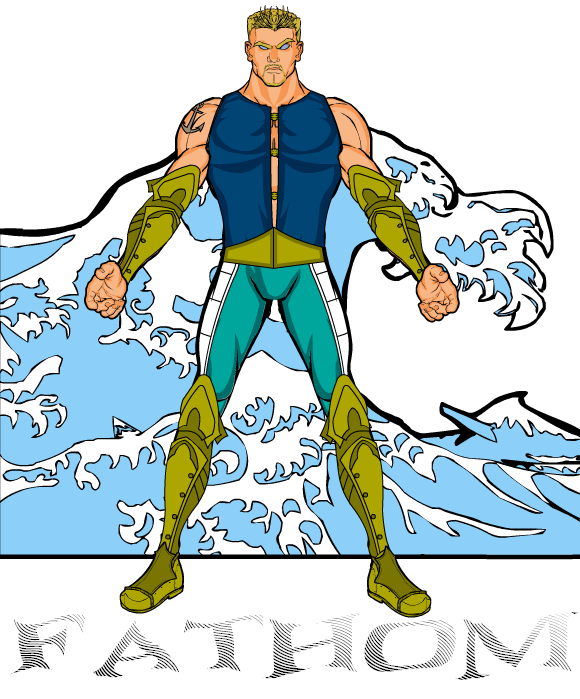 Finally is one that's not a character at all, but rather simply a fantastic illustration of a nature scene. "Volcano" by Me, Myself, and I gets better and better the more you look at it. I'd love to hear in comments how he got the fire effect, and how he basically made his own volcano base. A really cool effort that I don't think I've seen before anywhere. Really cool, MMI! 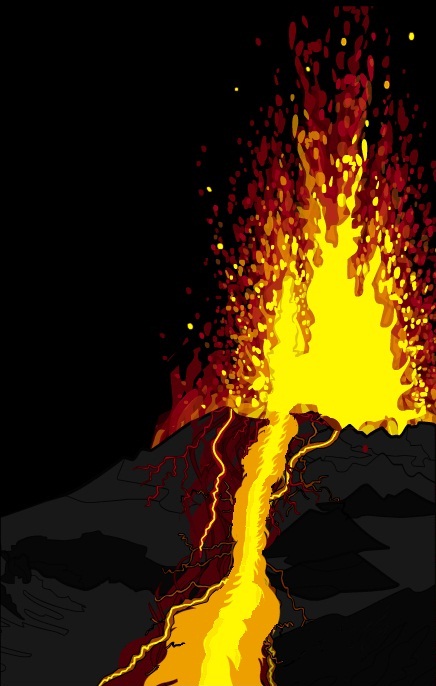 Edited to Add: The results are in -- congratulations to our first-time winner, Morzan! Morzan, let me know what you'd like as your prize, either an item or portrait to go in HM3, or a Sketch of the Day subject (like the recent Ms. Marvel one).

This entry was posted in Challenge Favorites, Challenges, Uncategorized. Bookmark the permalink.