Thanks to all of you who played along on this most excellent Sunday of American style smash-mouth NFL football with the "Design a Fantasy Sports Logo" Pop Quiz Contest! My fantasy team (the Gotham Dark Knights) did fairly well, and has an 11 point lead heading into Monday night's game, where my fantasy opponent has the San Francisco defense going up against my own Frank Gore. My hopes of crushing his hopes and dreams remain high, which makes me a gleeful little bald man.

There were some very funny entries, including a few team names I wish I'd thought of. To wit, I thought the Bizarro Spectators, Barsoom Jeddaks, Lorien Arrows, Boston Stranglers, and the Latverian Doombots were all fantastic teams. I might have to expand my fantasy outings next year so I can steal ... er, borrow ... one of those titles, they're just great.

When it came to the actual logos, there were severral that I thought were pretty good from Gargoyle323, Atomic Punk, Blue Blazer, Jack Zelger, and Myro:

Just like with the Kurgan, though, there can be only one, and definitely my favorite both for the team name and the actual logo illustration was Myro's "Latverian Doombots": 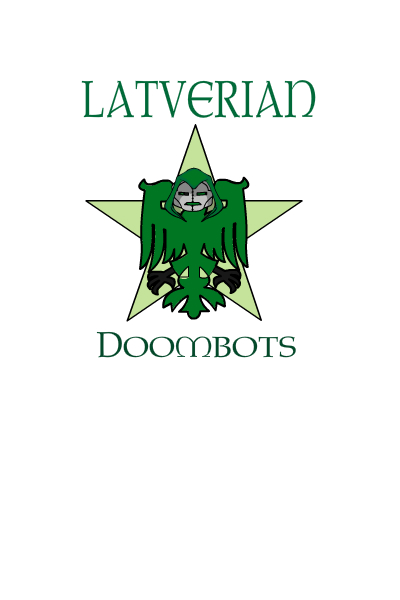 I love that cute little Doom hood and face on the heraldic body, that's awesome. I could totally see that on a helmet or jersey. Hell, I'd probably buy one!

So congratulations to Myro! Let me know what you'd like for your custom black and white character sketch -- what character and what they should be doing -- and I'll put it on The List.

And thanks to all who entered, this was fun! It made for a good distraction while Peyton Manning was ripping my heart out in the first half. All those weapons and he just HAS to throw touchdowns to the two guys on my fantasy opponent's team. Jerk.