When last we left our Lone Wolf, we were deciding whether or not to call out to some passing soldiers. We decided to go for it. We don't have a record of the actual signal, but I bet it was some variation of "Me love you long time!" Or not. Regardless:

The officer orders his men to halt and asks you your business. You tell him who you are, and how the monastery has been destroyed. He is deeply saddened to hear your news. He offers you a horse and asks you to accompany him to Prince Pelathar, the King's son.

I suppose it's possible this guy is a brigand disguised as an officer, but that seems unlikely -- if he wanted to rob or kill us, we're outnumbered and cowardly so he'd just run us through. In the interest of keeping the story moving, therefore, I'm just going to make an executive decision and fire everyone. Wait, I mean, we're going to follow the officer to the lovely environs of page 97, which I hear is nice this time of year.

Ahead of you, you can see a fierce battle raging across a stone bridge. The clash of steel and the cries of men and beasts echo through the forest. In the midst of the fighting, you see Prince Pelathar, the King's son. He is in combat with a large gray Gourgaz who is wielding a black axe above his scaly head. Suddenly, the Prince falls wounded -- a black arrow in his side. 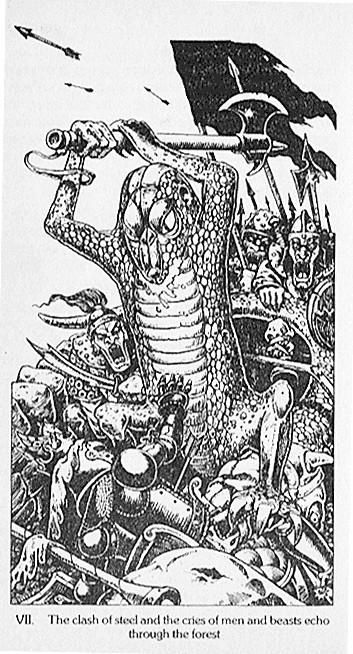 You'd think the Prince would have some sort of elite bodyguard, but no -- it's up to one little Lone Wolf to either save his royal hide or bravely run away. So which will it be, cubs?

6 Responses to The meat puppet formerly known as Prince