All-around All-Star Mark Shute has completed the ItemRight-Rifles set of items for HeroMachine 3, and it is now available for your shooting pleasure! He wanted me to pass along the following notes on the set:

But that's not all! The careful reader will have seen item 2 and thought "But there IS no Heavy Weapons set!", and thereby be led into confusion. Never one to foster confusion (except for tonight during my fantasy football draft, when I will encourage our new members to draft all kickers and defensive backs in the first four rounds), I am very happy to announce that Mark has ALSO started on the ItemRight-HeavyWeapons set, AND the first batch of items is already posted and ready. How's THAT for coming back strong from a holiday weekend!?

OK, granted, all I did was delay Mark's hard work by a week, but still.

Here's a preview of those Heavy Weapons items Mark has produced to date: 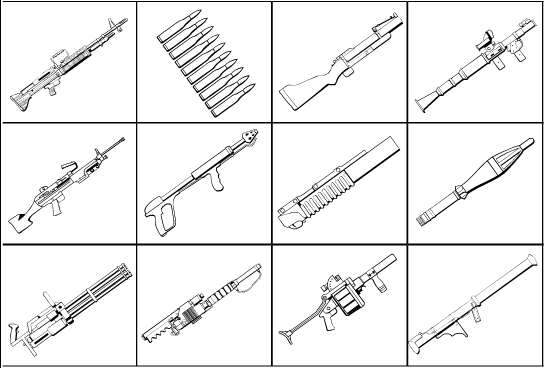 This is your chance to request specific items to go in this new set for Mark. He prefers links to images showing exactly what you mean, and ideally they should be in the correct side-on orientation -- he can't produce these from photos with, for example, the barrel pointing mostly at the viewer, they need to be seen from the side.

Be sure to thank him for all his hard work, these are great items that I would have been much (much) slower at producing and which probably wouldn't have turned out half so nice. Great job, Mark!