Don't get me wrong, I love me some Iron Skull. The crazy eyes, the improbable origin, the dubious power set, it's all so wonderfully bizarre that you can't help but like him.

But this "super" version of his costume is just wretched: 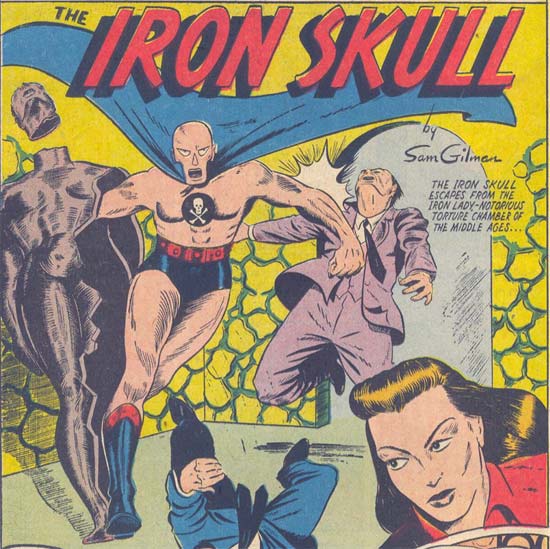 Is that skull and crossbones insignia tattooed on his bare chest? Or is it one of those peel-and-stick magnetized decals like you see on business vehicles? It's not helped any by the cape, which is either magnetized as well or just ties at his throat, since there's no shirt to stitch it to. Completing the stunning ensemble are the blue swim trunks held up by the obnoxious red studded belt, and matching red studded fringe on top of his boots. I don't know why the boots need a belt, maybe he has troublesome ankles.

In general, you should either go nude or go home, but running around mostly naked with a few super-hero bits tacked on looks terrible. It feels like somehow he rolled out of the shower and was only halfway dressed when The Call came in.

He was much better off when he just wore a suit and tie and tried to taunt his enemies into only firing at his head. Although apparently he took one too many slugs to the ol' noggin and switched to this outfit instead. Pity.