I wanted to highlight a couple of the "daily sketch" type blogs that inspired me to start my own "Sketch of the Day. Or Every Other Day. Week. Whatever, Quit Hassling Me!" category. Shockingly they're even less consistent about publishing than I am, but it's still so much fun to see a new sketch pop up in my news reader. I find it inspiring. Something about freeing the artist from the production schedule, of having to illustrate a story, makes for a very rewarding process. And sketches instead of full-blown illustrations capture a sense of whimsy and raw imagination it's hard to find in other places.

First up is "bletchskog", the daily sketch site of "Hector Plasm" and "Invincible" artist Nate Bellegarde. Here's one example I particularly enjoyed: 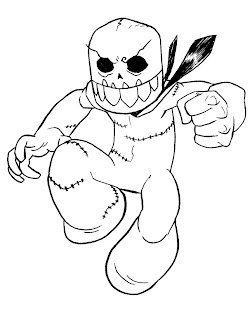 It's inked, while most of his sketches are done in pencil, but I think he was able to retain that dynamic and spontaneous feel even so. Which is harder to do with ink than you'd think.

Next is former "Invincible" artist/co-creator Cory Walker's "scatchblag". Again, these are mostly black and white pencil sketches, though Cory goes in more for Supergirl costume designs and tends to have a little more wide-ranging a selection of subject matter than Nate. He also is able to capture more serious, somber moods, as you can see in this one: 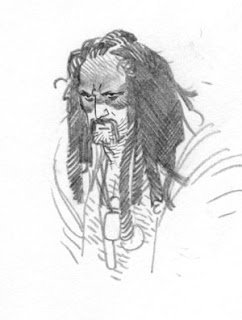 Finally, Cliff Chiang's site doesn't do a "Sketch of the Day" thing but he does post a lot of character sketches and such that achieve much the same effect. I particularly enjoy the convention sketches these guys post, those are a lot of fun. I can't imagine how he cranked this out at a convention along with all the other commissions and still had it turn out so spectacularly well:

All three of these sites are emphatically "Things I Like" and I hope you will, too.