Super heroes often forget they've got their underwear on outside their pants, but they don't usually forget the actual pants themselves. Which makes "The Unknown Soldier" really stand out: 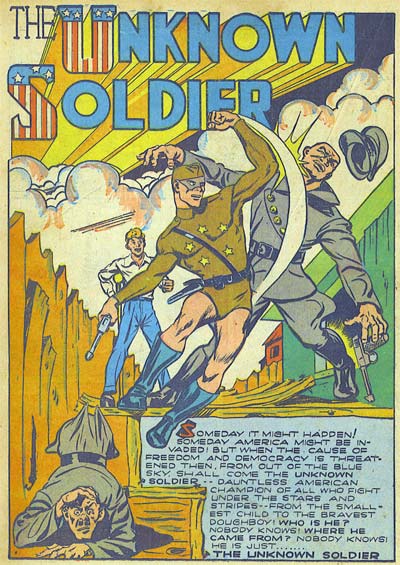 I know in Australia they have a military uniform that involves shorts. I can understand that, because let's face it, Australia is hot, folks. But I can't think of a single country that dresses their soldiers in Speedos. Although if there is one, I bet it's a banana republic, because then they could call their uniforms the banana hammocks.

Anyway, can you really blame this soldier for being unknown? He was probably all ready to stand proudly in front of the troops as the very model of a brave American WWII soldier, only to finally see the uniform in all its bare-legged, buttock-baring glory. Whereupon he immediately demanded a mask. And entry to the Witness Protection Program should he ever become Known.

20 Responses to The Understandably Unknown Soldier