"Lord of the Rings" looms over its genre like no other work of fiction in any other area. It forms the foundation of everything from the most successful pen and paper RPG ever in "Dungeons and Dragons" to the most successful MMO of all time in "World of Warcraft".

While it may be the most influential work of fiction on the genre, though, it's not the only one. Which got me to thinking about other favorite fantasy novels that influence how I think about other pieces in the genre, whether they be computer RPGs or movies. 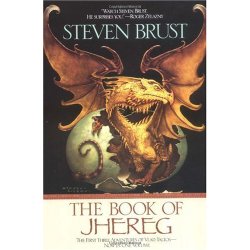 I want to focus on fantasy novels for now, although certainly at some point you could also discuss influential movies, stand-alone games, or other genres like science fiction. For now, though, let's stick with fantasy novels.

One of the biggies for me was the "Dragonriders of Pern" series, partly because it was the first series I struggled with through its opening, only to be very glad I did. I liked how it took standard fantasy mainstays and merged them with science fiction explanations. "The Harper Hall of Pern" series also helped me appreciate the non-combat aspects of fantasy world building, understanding how interconnected a world has to be to make sense and how adventures can arise even if no one picks up a sword.

I discovered it too late for it to be formative, but for my money the "Vlad Taltos" novels by Steven Brust are among the best mature fantasy novels out there. I love the way magic and even more fantastic elements like resurrection are handled in a matter-of-fact way, which is how they ought to be if everyone is running about raiding dungeons all the time with Bags of Wonder on their belts.

I read and enjoyed the Xanth books when I was younger, but I can't say they influenced me particularly, since ultimately they're pretty derivative.

That's just the tip of the iceberg, but I didn't want to go on too much. I'm more interested in what fantasy novels influenced you (although my list of books that moved me has an awful lot of sci-fi on it), the ones that have stuck with you over the years and which inform your reaction to genre pieces you experience now. So sound off in the comments!