Having left our Lone Wolf standing indecisively in front of a tunnel when last we checked in (sorry for the long delay!), we eventually direct him to proceed forthwith into the Freudian landscape:

The tunnel is dark and the air is much cooler than outside. You carefully advance with one hand on the tunnel wall to aid your sense of direction. You have been in total darkness for three minutes when you detect the foul smell of decay ahead, similar to rotting meat. If you have a Torch and Tinderbox in your Pack, you may light the Torch to see your way ahead.

Rifling through our Pack, we do not, sadly, have a Torch or a Tinderbox. We do, however, have a "Tablet of perfumed soap". I bet we try to set that on fire, but no luck.

Suddenly, something heavy drops from the tunnel ceiling onto your back and you fall to your knees. It is a Burrowcrawler and you must fight it, for it is trying to strangle you with its long slimy tentacles: 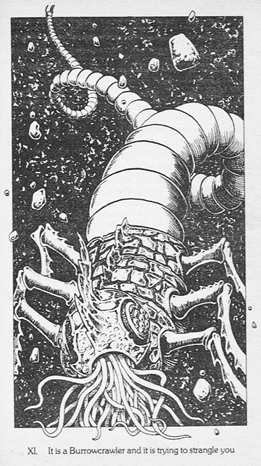 If you do not have a torch, deduct 3 points from your COMBAT SKILL during this fight. The Burrowcrawler is immune to Mindblast and Animal Kinship.

That is unfortunate, as our favorite tactic is to use Animal Kinship to lure a critter close, only to blast it with the awesome power of our minds. Pity. Our regular Combat Skill is 19, +2 when using a Spear (which we are), -3 for being in the dark, for a total of ... um ... (carry the three ... curse that English and Art degree ...) 18. Or so. Ahem.

Closing my eyes and pointing to the Random Number Table, I get a 6. Turning to the Combat Table, I see we are at a +1 relative to the Burrowcrawler, meaning our foul, slimy foe takes 9 points of damage while we take 2. Since he has a paltry 7 Endurance, we not only kill him with one mighty thrust of our spear, we also get to dance on his corpse and hurl insults at him.

As an aside, how awesome is the caption of that image? "It is a Burrowcrawler and it is trying to strangle you" sums up the whole RPG experience so perfectly, I just love it.

The slimy creature lets out a long, ghastly death cry and collapses. You are near to panic and scramble to your feet, grabbing what you think to be your belt from the jaws of the dead beast. You can see light in the far distance, and you sprint for it as fast as you can. When you finally emerge into the daylight, you fall onto the leafy ground and fight for breath in painful gasps.

Slowly sitting upright, you notice that you are still wearing your belt -- you had not lost it after all. What you grabbed from the jaw of the Burrowcrawler was a leather strap with a small pouch and a sheathed Dagger half way along it. You break open the clasp to find it contains 20 Gold Crowns. You may take both the Dagger and the Crowns if you are able to.

Feeling a little better now, you gather your Equipment together and push on eastwards into the forest.

We can only carry two weapons, and we already have an Axe and a Spear. We aren't giving up our Very Special Spear, especially now that it's covered in Burrowcrawler guts (surely the next tavern wench will be impressed with that!), and I'd rather have an Axe than a Dagger since it can be used for chopping up firewood. So we're pocketing our hard-earned Crowns and turning to 157 like a good Lone Wolf.

The forest begins to thin out until finally you can make out a road through the trees ahead. The highway is full of people heading south. Many are wheeling their possessions along on handcarts.

This is a tough one. I mean, on the one hand we're the Lone Wolf, but on the other hand it would be nice to see some people who aren't either dead or trying to make us dead. I'm curious to see how you choose to go on this one.