In my defense, the abandoned backpack we've been staring at witlessly for the past two weeks despite early and overwhelming desire to take it is very pretty, with lots of embroidery and a two-level effect like a little path running down the middle (NI!). So we were hypnotized, basically. Ahem.

Anyway, we decided to examine the contents of the bundle, which leads us to:

Wrapped in a bundle of women's clothing is a small velvet purse containing 6 Gold Crowns and a Tablet of Perfumed Soap. You may take these Items and continue your journey. Turn to 213.

See, women's clothing! And soap! Given our history I think we can be forgiven for lingering over these reminders of a softer, gentler time, when no one was trying to kill us. Dropping the soap, yes, getting stabbed by Giaks, no. Suitably attired and smelling lily-fresh, we resume our journey.

You have been trudging through the forest for nearly two hours. The nagging fear that you are lost begins to seem a reality. Apart from the occasional cry of a Kraan in the far distance, you have seen or heard no evidence that the enemy is in this part of the forest. As you descend a rocky hillock, you see something unusual in the tangled woods ahead. Turn to 331.

Surrounded by thorny briars and closely packed roots, you see the entrance of a tunnel disappearing into the hillside beyond. It is approximately seven feet in height and just over ten feet wide. As you get closer, you can feel a slight breeze coming from the inky blackness. If the other end of this tunnel emerges on the far side of the hill, it could save you many hours of difficult climbing. But it could also harbour unknown danger. 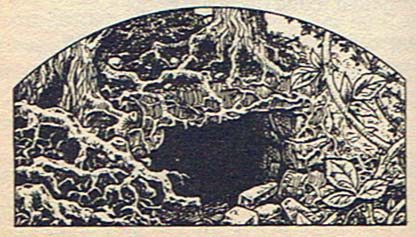 So what'll it be, gentlefolk? A brave but possibly foolhardy plunge into Freudian symbology, or attempting to scale a hill because it is there? Either way we're looking smart and smelling great, so I am sure we'll have no problems with whatever we might face.

4 Responses to Packing it in