With a special thanks to the HeroMachine Facebook group for most of these suggestions, our question of the week veers away from the various permutations of "Whose ass would Wolverine or Batman kick" to something more light-hearted:

I really wanted to open this up to let you add your own suggestions, but in the past that hasn't gone very well -- someone inevitably submits an offensive or wildly immature entry and I have to go in and delete it. But hey, that's what comments are for! So let me put on my Very Serious Scholar face and take a look at the options.

If I sit back and ask myself "Jeff, what would you most like to see on a comic book page?", I have to first assure my wife that talking to yourself doesn't make you crazy. Necessarily. Then I have to admit to myself that I've been sneaking Twinkies behind my back. Slut!

But after THAT, I know that watching Care Bears and Ewaks off each other in glorious four color mayhem would make me almost unutterably happy. So that gets my vote. How about you?

And though it's not on the list, this is the kind of fun I'm talking about: 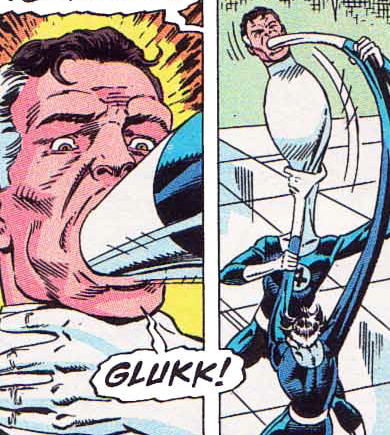 20 Responses to Poll Position: Putting the funny in comics