Someone on the "Star Wars: The Old Republic" forums posted the following:

Maybe I'm just going through a stage of Male-PMS, but I feel like being really blunt here. The people who post screenshots of there person made with HeroMachine and call it their artwork, well, there are several things wrong with this:
1.) HeroMachine is not your program, your just using a public device. You cannot call it your art if you didn't make it. So you spent hours slaving over the hardest efforts to click a button many times to get a poor rendition of something that vaguely resembles a person with a generic stance that never changes.
2.) It's beyond unoriginal. I've seen it a lot around here, and it just irks me! It is so much more beneficial to ask someone to draw it for you. It benefits you in that you have a genuine piece of artwork that somebody actually put effort into. It also benefits them in that it helps them with the experience. Computers don't learn to draw from reference sheets and imagination, they get it from a billionaire who programs it into them.

I think it's an interesting question -- are images created in HeroMachine art? Why or why not? 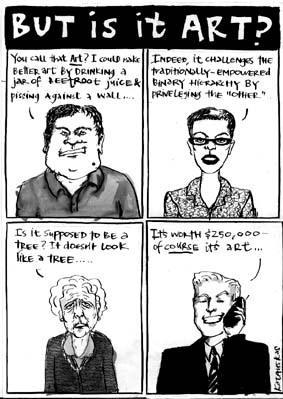 This entry was posted in Meta, Open threads. Bookmark the permalink.

38 Responses to Is HeroMachine art?