I sympathize with the poor bastard who had to generate a costume design for Kangaroo, but that's not going to stop me from being a jerk about it: 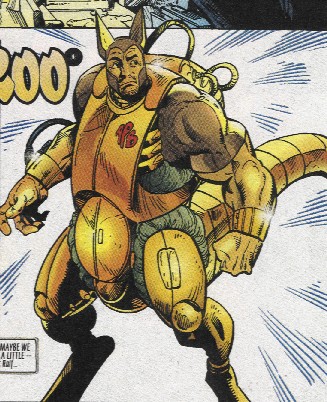 Now that you've seen it for yourself, you have to admit that restraining from jerkitude would be beyond the means of most mortals, even the alliterative ones.

You have to cut the designer some slack, because come on, kangaroo. But I'm pretty sure nothing in the character description said "ginormous codpiece" or "ridiculous ears mandatory", dude has to flat-out own that decision. Plus I can't figure out how the character shoves his presumably human legs into those lower extremities, because folks, calves and feet don't go that way. The perspective's a bit tricky, though, so maybe in real life it all comes off as giant clown feet, I don't know.

Still, I do sympathize with the artist, because it's not easy coming up with a costume for someone who got trounced on by a radioactive kangaroo. Not and keep a straight face, it's not. And I am sure that a lot of this design is intentionally humorous.

But what I can't forgive is what looks to me like a giant diaper tucked in behind that huge codpiece. That's just wrong. To say I don't want to know what's going to come out of that pouch is an understatement of Galactus-like proportions; I just hope they have the patented Sur-Seal leggies, because given the enormous power of his takeoffs and landings, any sort of leakage is going to be real, real grim.

So to this costume and its sadly ridiculous Super-Huggies, I have to say a regretful Kanga-NO.