While the animal kingdom contains many fearsome models upon which a super-powered individual can base their identity -- the mighty lion, the speedy leopard, the swift-striking falcon -- you have to be very careful which you actually choose. After all, who wants to go around known as The Slug or The Sloth or ... um, the Porcupine? 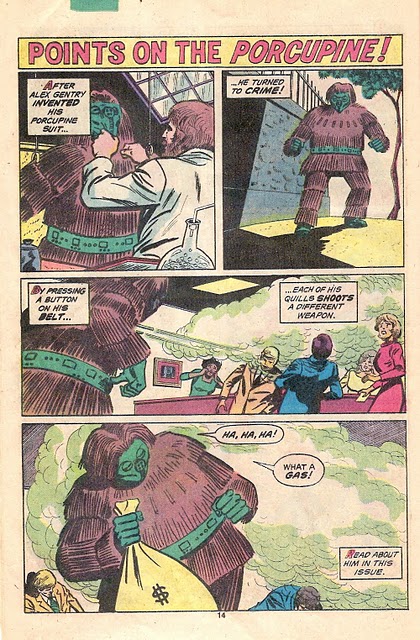 Porcupines (motto, "Third largest rodent!") are slow and completely non-aggressive, which isn't ideal for a super villain. On the other hand, they do have sharp pointy bits, which puts them ahead of many other potential candidates. So I'll give him a pass on the inspiration (barely). And they did give him the ability to fire his quills, along with a host of other powered-armor options. So he wasn't a wuss or anything.

If you're going to base yourself on a barely-qualified animal, it's imperative that you not walk around looking as if your outfit were woven from wicker.

And if you do slip up and find yourself in a costume that resembles wicker, based on an animal that's more or less a highly irritated ground sloth, by all that's holy please do not -- repeat, do NOT -- also weave yourself a wicker hairpiece that looks like a refugee from a bad "Little Lord Fauntleroy" production.

On the other hand, from the page in question he appears to be a flatulent wicker-woven prickly ground sloth, which I admit is pretty intriguing.