A bad super hero costume redesign in isolation is a sad and tragic thing, but let the disease spread to multiple hosts on one team and the results take on a kind of epic, balletic splendor of suck. Witness, this ill-fated revamp of the WW2 ace flying group "The Blackhawks" that tried to turn them into costumed super adventurers: 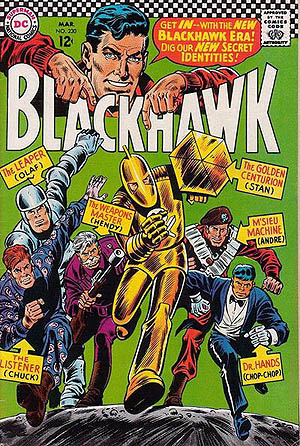 It's hard to imagine a more ridiculous crew outside the pages of "Teen Beat", although I have to admit I would probably pay good hard American cash for a cage match between the phallo-centric "The Leaper (Olaf)" and Marvel's Batroc the Leaper.

In fact the names these guys were given serve as an accelerate for the runaway fashion disaster DC tried to foist on an unsuspecting nation. Can you imagine being threatened by a guy dressed in blue jammies with pink ears on it? Maybe if the bizarre outfit was some sort of Viet Nam era testament to taking the ears of his fallen enemies as trophies, but this guy's just called "The Listener". Maybe after he gives his opponents a sound listening-to, he follows it up with a warm cuddle and some cookies.

I'm not going anywhere near "Dr. Hands", the sterotypically-rendered Chop-Chop. All I'm going to say is, that's what we used to call the male nurse in high school who took his duties to give the guys physicals to qualify for P.E. very seriously. And thoroughly. And enthusiastically. Plus, who's going to go to a doctor actually named "Chop Chop"? Not me. Although there is a urologist in the Austin area named Dick Chop. I kid you not.

However, in light of the recent release of "Iron Man 2", follow-up to what may be the best super-hero movie of all time featuring one of the great all-time super-hero costumes, I have to reserve most of my concern for "The Golden Centurion".

First of all, if you're wearing a high-powered super suit, you shouldn't go around stealing kites from children to use as a "shield". That's just rude.

Second, invest in some accouterments, for goodness' sake! That's the most boring suit of armor I've ever seen. Plus the boots look floppy, as if they used to be traditional Blackhawk jack boots that just got spray-painted with gold.

In fact, I bet that's exactly what happened. They got word at Blackhawk HQ that the government was shutting their program down due to lack of funding (and an enemy), so the boys took it on themselves to raid the supply closet for home made "super hero" costumes. I can imagine Stan setting that mighty cleft chin, leaning on his knee with his stout forearms, and telling his subordinates with a steely grin, "Boys, I've seen the future, and it's primary-color spandex. Now get out there and make yourselves look ridiculous."

To which all I can say is, "Mission Accomplished, sir."

(Thanks again to ReaderKate for finding this gem.)