Some characters constrain themselves to just a bad costume, while others have bad costumes, bad sidekicks, bad gear, or bad dialog. But you rarely come across someone who pegs the meter on all of those levels at once, like Gold Key Comics' "The Owl": 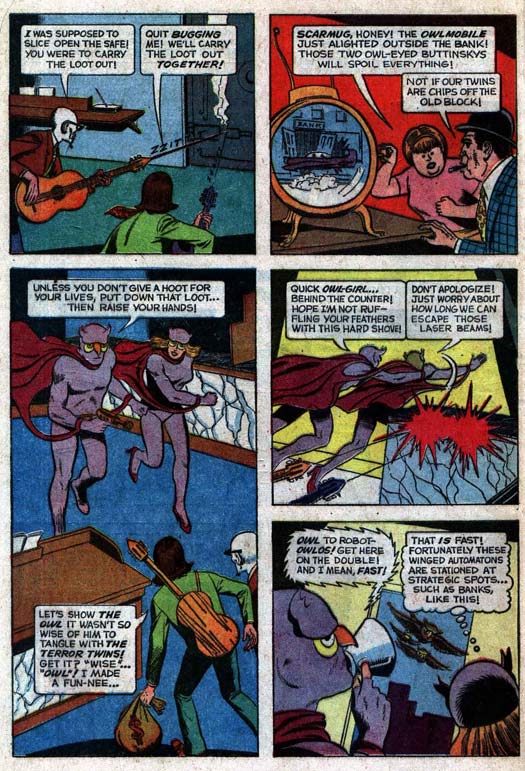 The list of good purple costumes is pathetically short, and the insightful (i.e. "not blind") reader will guess that "The Owl" does not appear on it. A plain body suit may be enough to get you in the Blue Man Group but you've got to bring something better to the super hero game if you want to be taken seriously. The mask and the silly head tufts with yellow bags under the eyes don't help, making him look like nothing so much as a dyspeptic burlesque queen slowly wasting away in a "Former Starlet" nursing home, or maybe a failed Penguin henchman.

But what clenches this entire ensemble for the "Bad Costume Hall of Fame" is the wine-colored cape which is bizarrely attached to his wrists via the broken-off ass-ends of a tetherball. I cannot for the life of me imagine what good that possibly does. Did "The Owl" have a problem with his cape escaping at some point in the past, possibly in an effort to flee the scene of the fashion disaster in progress, thus necessitating some sort of leash?

As uninspired as he is on his own, though, "The Owl" gets outdone in the unfortunate costume competition by his girlfriend, the shockingly named "Owl Girl". There's nothing like red high heels to really set off a purple body suit. Maybe she was anticipating the great observation from "Good Morning Viet Nam" when the Robin Williams character advises the army change to a similar color scheme: "It's war, let's clash!"

So, bad costume -- check. Bad side-kick -- check. "But Jeff," I hear you say, "what else is bad about The Owl?!" Well I'm glad you asked, imaginary internet person, because if you carefully read the comics page you'll see that the bad pun to panel ratio is approaching one. I was trying to imagine what is worse than a character named after an owl, dressed in purple, standing next to another owl-themed purple-clad woman in red heels, who runs around spouting "jokes" that would embarrass Golden Age Robin, when I realized the answer was right in front of me -- if the "jokes" were puns that rhymed! That combination of badness is almost enough to rip the fabric of space-time.

The only thing missing for the perfect combination of lameness, for that singularity of suck, would be if you combined all those things into one page and then finished it off with an incredibly silly set of gadgets like an Owl Mobile or, I don't know, maybe "Robot Owlos".

(Many thanks to reader Kate, who once again has come up with a winner of a loser.)