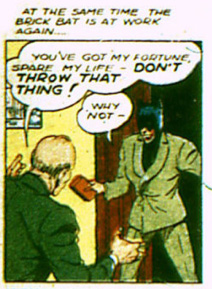 But sometimes, the overall lame character concept can super-charge even a weak outfit, catapulting both into the upper echelons of badness.

Start with the name. What do a brick and a bat have in common besides alliteration? And in combination they tell you nothing, beyond suggesting something along the lines of "bric-a-brac", which sort of fits because, let's be honest, this guy is a random assemblage of only loosely related concepts.

Of course, bats fly and so do bricks, if they're thrown. Which is what this guy does -- he throws bricks. Seriously. Granted, usually the bricks are filled with some sort of deadly gas, which is both more sinister and more befuddling because what the hell is gas doing stuffed into a brick?

Setting aside that utter inanity, however, you're left with the fact that his whole power is throwing bricks. And not like with super strength or inhuman accuracy or anything. Nope, he's just a guy in a bad suit and knock-off mask throwing dried clay. What does the bat cowl have to do with that? I have no idea. Maybe he's just vaguely embarrassed by the whole business and hopes to hide his identity to avoid the ensuing mockery.

You'd hope he could come up with something clever like a Brickarang or a Brickmobile, but no. I hope at least he calls his house "The Brick Cave", even though it's just a house, but given his overall M.O. I seriously doubt he's that creative.