If your super power involves running away, there are two things you want to avoid when it comes to setting your your heroic identity.

First, you want to avoid choosing yellow as your primary color, because (news flash!) in our culture, yellow is the color of cowards. You rarely want to combine running-away powers with cowardice.

And second, on the off chance some dim-witted criminal misses the whole "I'm bladder-voidingly afraid" vibe, you probably don't want to name yourself anything even vaguely reminiscent of, in fact, pissing yourself.

And yet, I give you "The Whizzer": 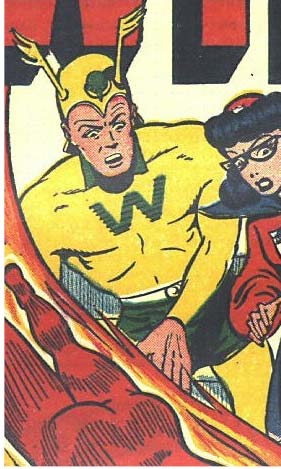 Super-heroes use costumes to send a message about themselves, whether that message is "I'm a bright icon of hope" for Superman or "I'm about to kick you in the face and you won't even see it coming" in Batman. It ought to go without saying -- and apparently, tragically, it most definitely went without saying where The Whizzer could hear it -- that you don't want to send a message that says "Please don't hurt me or I'll pee on both of us." I would bet you'd have a hard time inspiring fear in anyone besides the men's room attendant with that kind of look.

But let's say somehow you have attracted a Rogues' Gallery of epically clueless proportions, who have, against all odds, completely missed the fact that you're depicting yourself as a galactic-level coward. In that unlikeliest of events, the very last thing you would want to do, the absolute worst way you could possibly reinforce the unfortunate stereotype of your moniker, would be to mount a chicken on your helmet. And yet: 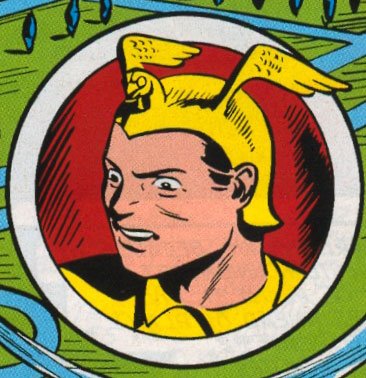 Oh sure, he'll claim that's an eagle, but I think the preponderance of evidence would clearly show it's a chicken. Because I've met eagles, my friends, and I can assure you, not one of them would be caught dead hanging out with the King of Wee. Even future guests of KFC have more pride than that.

(Many thanks to reader Kate for once again pointing out an awesomely bad Golden Age costume!)

20 Responses to I’m the Whizz!