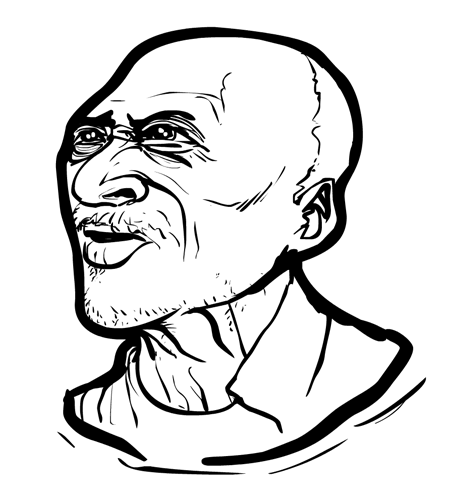 I also screen-cast this one. It's kind of long, if anyone knows of an easy way to re-record movies at double speed or something, please let me know. I'm ignernt. I tried figuring out iMovie, but for a design-oriented company, some of Apple's software interfaces are confusing at best, incomprehensible and frustrating at worst.

This one proceeds the same way all my illustrations do. First you lay down some basic sketch lines so you know in general how the drawing is supposed to look and where things go. I then make a new layer, turn the old one either gray or turn on "onion skin" mode for it, then draw on top of it with darker lines. If I were doing this by hand I'd just use very light pencil strokes to start, then get firmer and firmer til the drawing took shape.

I remember when I was a kid, sitting and watching my brothers Jimmy and Johnny sketch. I was mesmerized. Sometimes they'd let me request a particular subject, but really it didn't matter, I just was fascinated by the whole process of starting with a blank page and ending up with something awesome looking. It was like a kind of magic, and that it was my own brothers doing it just added to the whole thing.

Jimmy ended up becoming a dentist, and though he continued to have a passing interest in comics I don't think he kept up with the sketching. Johnny's a geologist, and around high school I think it was, ended up turning his creative energies to music instead of visual art. He's not only darn good, but his kids are amazingly talented musicians as well.

So I guess it fell to me to uphold the family honor in the visual arts. You can in part blame them for my love of drawing, and in part my dad for bringing home comics from time to time. But mostly, you can blame Superman. Punk.