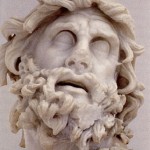 With thanks to MartianBlue for the idea, your challenge for this week is to come up with a character inspired by Greek Mythology!

You've got the whole playbook from which to choose, from an intrepid adventurer like Jason and his Argonauts to the savage Titans to medusae to satyrs to Argus to Hercules and everything in between, so I am expecting some awesome creations. I know the temptation to draw from other mythological traditions will be strong, but let's keep it to Greek for this contest.

The rules as usual are simple:

The overall winner will receive either a portrait of themselves or any one item of their choosing for inclusion with HeroMachine 3. You've got one week, so good luck to everyone!

P.S. Don't forget, you can still vote in Round One of Friday Night Fights, too!

P.P.S. If you're looking for a who's who in Greek mythology for ideas, this Wikipedia article is a good start.

103 Responses to Character Contest 22: Of odysseys and golden fleeces