Comic books are all about two sides fighting it out, and that kind of head-to-head battle has been sorely lacking here at HeroMachine.com. But no more! Because starting this week you'll have your chance to duke it out with each other in our new contest feature, "Friday Night Fights"!

Here's how it works. Starting next Friday, November 20, sixteen challengers will square off in a set of eight head-to-head battles. The highest vote-getter in each match will move on to the next round, again vying against one competitor for top vote-getting honors. We'll go four total rounds, going from sixteen challengers to eight, to four, and then to the finals matching the two bracket winners against each other: 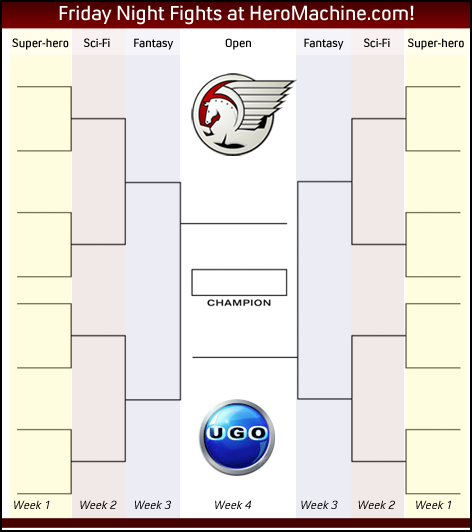 I would like to thank my buddy John for coming up with this idea in the first place, and then further helping me refine it. Thank you Mr. Hartwell!

I'd also like to tip the hat to Bahlactus for starting the original comic-book Friday Night Fights. They're very different from this one, but any time you have super-hero types duking it out online, I think you need to warm the cockles of your heart (wherever those are) with thoughts of him.

Good luck, everyone who decides to enter!