From bad to worse

Choosing between two different levels of epic failure can be tough. What was worse, "Superman IV" or "Batman 4"? What's longer, infinity or infinity plus one? Or even, which is worse, the original Falcon costume: 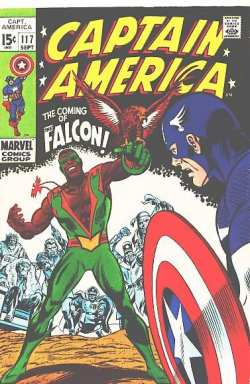 Or the red and white one that replaced it? 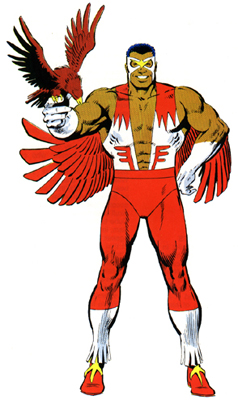 On one hand, the original costume was a masterpiece of Seventies Blacksploitation tropes, from the crazy bird medallion to the plunging neckline to the Michael Jackson-anticipating single glove. You also have to admire anyone willing to go out wearing red and green year-round and not just at Christmas. He's sort of like Disco Santa, but with an edge.

On the other hand, the "modern" red and white version is a travesty of both form and function, from the pathetically inadequate armpit feathers to the absurd tiny yellow faux talons on his feet to the is-that-a-beak-or-acne yellow doohickey stapled to the bridge of his nose. Honestly, I don't understand how any self-respecting raptor could bear to be seen in public with that travesty of an attempt to look like a bird.

For the love of Pete, he's got fake red wings on his stomach! I bet half the screeching that bird does is a vain attempt to say "You don't fly with your tummy, idiot!" and the other half is "Someone shoot me, please!"

At least he kept the virile plunging neck, although without the big gold belt buckle it looks more like a vest. And nothing says "Fear me, villain" like a vest.

I suspect that scholars will debate this deep question of relative suckitude for as long as we have internets. Or retinas to be burned by looking at these outfits. Or a flock of angry falcons, their wings ceaselessly beating out their plaintive wail of fashion-inspired despair.

10 Responses to From bad to worse