I've just added the Companion-Vehicles set to the HeroMachine 3 Alpha, including the following: 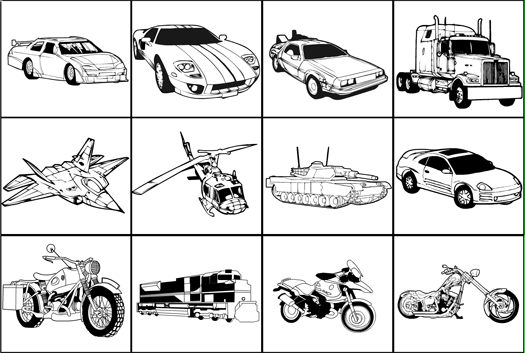 Most of these were drawn by using Flash's automatic "Trace" feature and then patching, so they're a little different stylistically than most of what is in the program. The very last car (not shown above), the 1920's style roadster, was hand-drawn, I'm curious what you think of the difference between the tracing and the drawing styles. Auto-tracing (no pun intended) is a LOT faster than hand-drawing, I did about six of these in the time it took to draw the one roadster. But, if the quality is different enough, I'll do what I have to do.

Let me know any other vehicles you'd like to see, and while we're at it, any Polearm bits Mark didn't include but that you want to see added in.

It looks like the Mini I was working on has been canceled after three weeks of hard work. Such is life. On the upside, most of these vehicles were drawn for it, so you'll get some spillover benefit. Most of the rest of it is probably not applicable to the main HM but we'll see.