Excuse me, Mister Starfinger sir? Black Manta called and wants his clothes back: 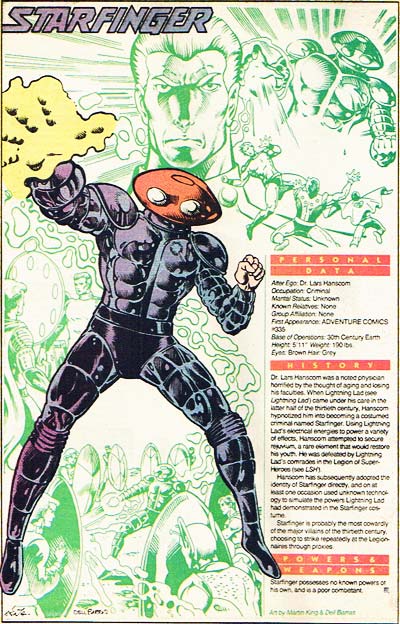 You would think that with the benefit of eleven centuries of advancements, a super-villain fighting the Legion would be able to do better than ripping off a lame Aquaman foe's look. But you'd be wrong.

The shame of it is, I always loved Black Manta's costume. Dude was seriously bad-ass, with that menacing saucer-head and evil fish-eye thing goin' on ... he was so much cooler than the pumpkin-clad Aquaman, I used to root for the bad guy to win.

But so blatantly stealing another guy's mojo is just lame. According to his writeup, "Starfinger possesses no known powers of his own, and is a poor combatant." Given that, perhaps outright fashion theft is understandable.