I am happy to announce that the winner of Caption Contest 58 and his choice of either his face or a custom item to be included in HeroMachine 3 is ... FishPants! 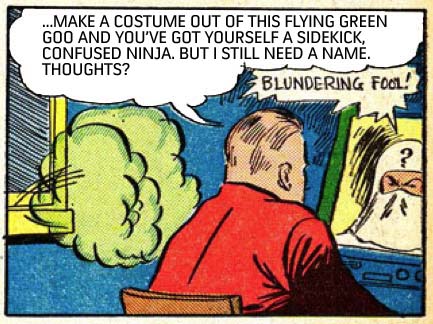 I had a hard time choosing between this one and the First Runner Up:

I think they both did the best job of incorporating Mystery Ninja's line in a way that was funny and not so forced. Ultimately, I went with FishPants because he had a higher joke density -- "Confused Ninja" makes me laugh as much as the idea of this guy calling himself "Blundering Fool", possibly the greatest sidekick name ever.