At the suggestion of some folks yesterday, I wanted to throw out a challenge and an invitation. We previously had a contest to see who could redesign the costume of golden-age character "The Black Terror". I thought you might like a non-contest follow-up to that, so after the jump I'm going to discuss another favorite from that time, "The Green Lama", and his outfit.

Let's take a look at the original design for this character: 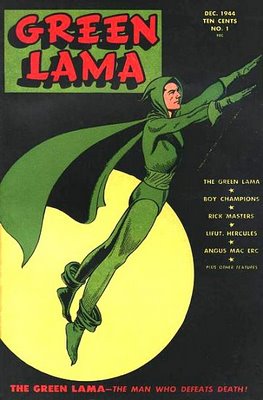 As you can see, it's pretty basic -- one color, cape, boots, full body leotard, the usual. The hooded cowl makes for some nice possibilities, and the floppy boots give him some flair. But in general, while this is certainly a serviceable costume, it's a little boring.

I think we can do better.

Whenever I want to re-imagine an existing character, I go back to basics. So I looked up Lama on Wikipedia, and the sense I get there is of someone who's a sort of guru, a mystic whose purpose in life is to guide people to a higher state of being.

In the actual comics of the time, of course, The Green Lama mostly beat guys up, which is almost but not quite the same thing.

So you've got two things to work with in his name, a color and a cultural heritage. The original character is a Westerner, which has possibilities, but they didn't really do much with that in terms of costume design.

I could see going in a lot of different directions with the basic concept of "The Green Lama", but this really is about seeing what YOU come up with. Although there's no prize here, it's just for fun, I'm curious to see what kind of choices you'd make and why you would make them. Don't limit yourself just to what's gone before with this guy either, if you want to take him in a totally different direction, go for it. Just the name has to stay the same.

You can either post an image of what you would design, or just a description of how you think he ought to look, or parts of his outfit you think would stay, or whatever you like. This is sort of a "costume redesign open thread", so feel free to bounce ideas off one another.