So by Friday, I'm usually pretty brain-fried and in need of distraction, a state which I am sure is shared by most of the world plus the people who read this blog. So during my jog this morning I thought of a new sort of Transformer called "Distracticons", whose only real power is to make their opponents stop paying attention for long enough to escape:

This week, I've been a bit distracted by the "Wednesday Comics" experiment by DC. If you haven't heard, each week DC is publishing a set of one-page comics stories on old-fashioned tabloid-sized newsprint, in an effort to revive the serial sensation of comics in their heyday: 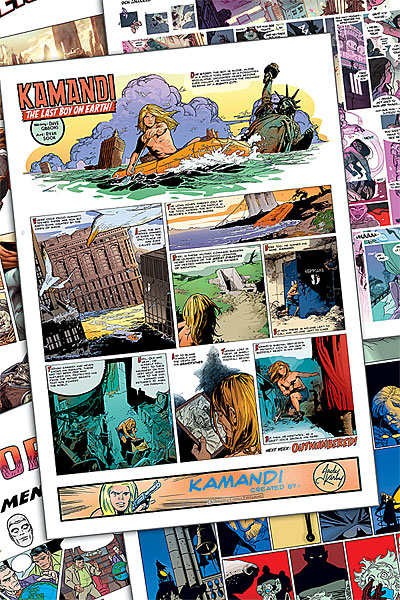 You can find reviews of the actual stories in lots of other places, but what distracted me today was thinking about the overall concept of the project and why I think it's probably going to fail.

The main problem I have with the experiment is that they're basically taking long stories and putting them out one page at a time. That works when the primary content delivery system is also serial -- i.e. newspapers that print in color only once a week. But the reason you don't have very many of those strips any more is because longer stories work better as one block rather than a series of one-page blocks a week apart. Just as novels eventually moved away from being serialized in magazines in favor of the more cohesive between-the-covers book format, people prefer to get their entire story all at once rather than having to ration it out.

The introduction and popularity of trade paper-backs has only exacerbated this evolution. In a real sense, the monthly comic book was the heir to the Sunday strips, giving the reader much more story in one package rather than stringing the same story out in four installments. Now for people like me, who don't have the patience or discipline to wait four weeks between issues, I can get the entire meta-story all at one sitting. It's like moving from short stories to serial novels in papers to the novel itself to trilogies to the all-in-one comprehensive all-three-novels-collected-in-one edition.

So in a world with TPBs and monthly comics, a weekly set of comics dribbled out one page at a time is just too slow, and too choppy, for a modern audience to really get behind. I think the storytelling -- which for me is the most important thing -- also suffers. You have to spend a panel or two either explaining what went before or what's about to happen, and that's just wasted space. Just like modern comics moved from taking a couple of pages and endless "editor's notes" to keep the reader informed about past issues to sometimes nothing more than a brief paragraph on the inside cover -- if that -- having to keep up the effort to engage a new reader appearing mid-stream distracts from the story itself.

A much more interesting experiment would have been to have the same physical format and the same schedule, but instead of serializing the stories, make them all true one-page comics, where every story is complete into itself on that one page. That would be different, fun, and interesting. Call it the Twittering of comics, the introduction of a very short time constraint in an attempt to distill the story down to its essence.

But as it stands, I just don't see getting behind something that requires you to go in every week only to get a small taste of a much larger story, told in a way that distracts rather than adds to the experience.

And even for Distracticons, that's a bad thing.