I've just released the "BackgroundFloors" set for the HeroMachine 3 Alpha. Here's a quick sample of some of the 2.x items -- plus some -- that have been redrawn for 3.0: 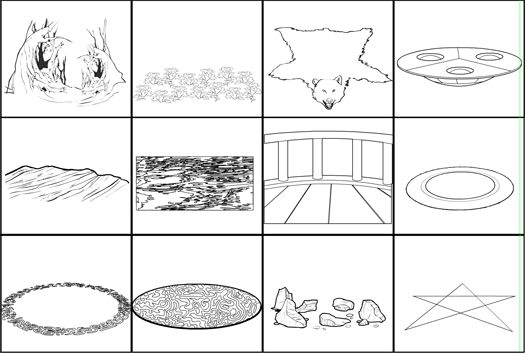 The idea behind these setting pieces that I'll be including in the "Background" slot are that you'll mix and match them to make up the environment you want. There are only a couple of full-environment items here, like the forest path, which I'm frankly not sure work all that well. The rest, though, are just pieces that you can use to build up the right effect.

I'm sure you'll come up with creative ways to use the new stuff, but let me know if you find any mistakes, see anything you don't like, don't see something you were really hoping for in a "Floor" set, or anything else that's on your mind.

I think the next thing to do will be a set called "BackgroundSky" or something like that, with the intent that they'd be placed essentially behind the Floors to make a complete environment. So give me any requests you have for those things that might not be included in that last request post.

After that I'll probably do some sort of middle-ground stuff like tree lines, mountains, etc. (kind of like the building roof retaining wall in this current release). Finally, at some point I'll just do a whole big set of "general environmental items" that you can stick where ever you want -- candles, books, single boulders, benches, that kind of thing so you can really dress the room just like you dress your character.

I don't know for sure if this is the right approach, so by all means feel free to opine about that too.

37 Responses to HM3: Hit the floor