OK, just one neck actually -- NeckwearStandard has been added to the HeroMachine 3 Alpha. Note that since this is a whole new top-level slot, it might throw off some of your saved characters. Or it might not, what the heck do I know? Here's a sneak peek at some of the new items: 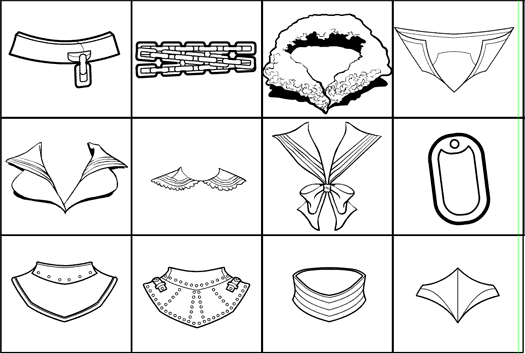 There are 53 Neckwear items at this point, including (I think) all the ones from 2.5 and many of the suggestions you made in the last thread. So thank you for providing those! Conspicuously absent are some of the more elaborate necklaces and pendants. I did include a number of basic chains and a connector so you can basically make your own if you're so inclined. More advanced stuff will probably wait til further down the line and a "NeckwearJewelry" set or somesuch. I tried some funky stuff with the design of these, figuring that the Head would be covering up their backs, let me know if it works or not. You can see it mostly with the high-collared evil overlord thingie and the furry bomber jacket collar.

Also, I slightly updated the Save code, to hopefully prevent the loss of your character if the browser crashes unexpectedly at some point after you saved it but before you manually close your session. I think part of the problem was that I wasn't using the "flush" command to force the data into the saved object. Let me know of any new weirdness you see as a result.

Next up? I need to dive back into the save/load code and figure out why it's misbehaving so badly on layering and forgetting items and that sort of thing. It shouldn't be but sorting out why will take some work. If I can I'll also try to run down the problem with the PNG and JPG options giving you the itty-bitty-guy-in-the-corner when you have any hands selected. That one's blowing my mind.

Anyway, those are the most major problems right now, that I feel like need to be addressed before moving on in good conscience to the next bunch of items. So updates may be a bit slow for the next week as nothing tangible gets done except for behind the scenes.

27 Responses to HM3: Neck and neck