The Conundrum of the Cape

As Pixar documented so brilliantly in "The Incredibles", capes present a real dilemma to the super-hero fashion designer:

Capes can kill you, and when they're not killing you, they're all folded up on themselves so you can't even see what's on them, which is why most heroes who opt to wear one go for a plain, one-color affair.

Which is where "The Green Turtle" -- already reeling from losing the "Animal Mascot Lottery" -- goes so horribly, horribly wrong: 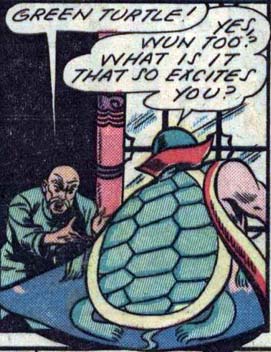 In case you can't tell, his cape features an enormous green turtle design on it, terminating with his head in place of the turtle's. Which, let's be honest, is as ridiculous as it is silly. He doesn't even have a turtle beak, for goodness' sake (and while we're on the subject, why the hell do turtles have beaks anyway? That's just wrong.) That's just a bad cape. When he's at rest in no wind, you can't see the design. Of course this is a comic book so there's always a dramatic wind blowing, but still, the only people who can appreciate it are those who are behind him. I suppose it's a good thing his enemies -- who you assume are the ones in front of him -- can't see it, because that's not exactly the picture next to "intimidating" in the dictionary, you know?

Of course, then there's the rest of his outfit. Or should I say, the not-rest of his not-outfit, since it's pretty much just swimming trunks, gloves, and boots: 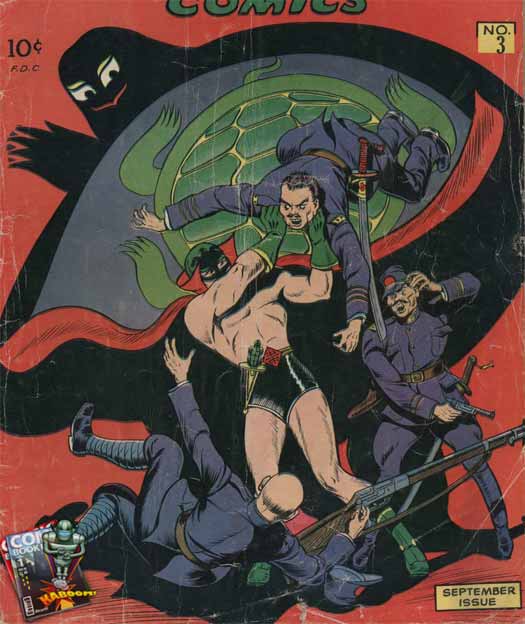 Granted, he's fighting in China where the climate is pretty hot, but still, I dare you to think of another job where running around that close to bare-ass-nekkid won't get you arrested at the minimum. And no, "Baywatch extra" doesn't count. You have to give him credit for loyalty to his theme, though, right down to that "I can't believe I have to hold on to the hilt with these legs sticking out of it" turtle dagger.

So to review: "Incredibles" good, turtle mascots bad, especially non-violent green turtles; capes bad, ugly capes worse; and cover up those man-nips, nobody wants to see a fifty year old retired male super-hero at Mardi Gras shouting to the girls "Let me show you MY boobs!"

Which concludes this "Most Random Bad Costume Post EVER", I believe I have meds to take now.

16 Responses to The Conundrum of the Cape