HM3: Get your head in the gear. Game. Whatever.

I've just updated the HeroMachine 3 Alpha with the "Standard" set of "Headgear" items. I have some items to note after the jump.

This set contains almost all of the HeroMachine 2.x Headgear-Standard items in one form or another, whether redrawn for the new perspective or disassembled like the knight helmet. A few were already contained in the Military or Zombie sets so I left some of those out. A couple were just kind of lame, so I left those out. I also included a number of items from the Headgear-Expansion1 2.5 set where it made sense.

This is NOT intended as the be-all, end-all of Headgear items. I still have the Headgear-Masks, -Aliens, -Fantasy, and all the rest from 2.x to convert over. I also need to add some support in Eyes and Ears to make the masks super flexible. Those sub-sets will have dozens and dozens of items specific to that general theme, so just because you only see a couple of medieval knight helmets in the Standard set doesn't meant that's all there will ever be.

Furthermore, the evolution of HeroMachine 3 and the nature of using multiple items has made it possible for you to create your own headgear items on the fly. For instance, in HM2 there were three helmets that were basically a metal cap, the same cap with hanging chainmail, and the same cap with Viking horns. In the new 3.0 set those items are broken out into separate pieces. Here's what I mean: 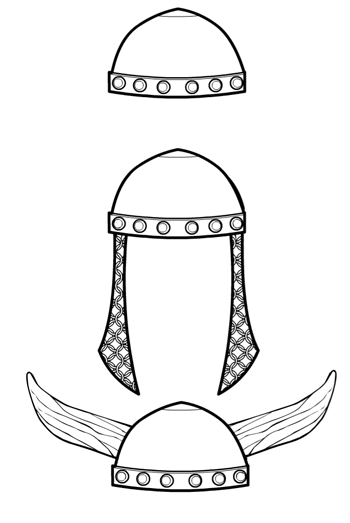 I included a couple of helmet ridges so you could play around with that, and am happy to add more in the -FantasyArmor set down the road.

I also wanted to point out that in essence, the Head items are full-head masks. I want to add plain eye holes to the Eyes slot in different shapes so you can color the Head the costume colors, then apply the eye holes from the Eyes slot using your skin colors to make it look like you have a mask with holes letting the skin show through. You can then turn on Multiples for the eyes and put your regular eyes in. This layering technique would let you have a whole slew of different mask types with eye holes like Spider-Man's, or Batman's narrow triangular ones, or Captain America's big ol' round ones, etc. In the old version, you were stuck with however many full face masks I felt like drawing with umpteen eye holes, but now you can make your own.

Or at least, you will once I get those eye holes added.

Which brings me to the next question. What do you want me to work on now? I of course will add any good suggestions you come up with for the Headgear-Standard set (by which I mean general interest items that don't duplicate too much stuff that'll be in a sub-set and that seem like they' be of general use to lots of people). But I can then either a) add all the general eye and ear items for better mask support or b) move on to Hair or Insignia or whatnot, or c) continue working on Headgear and convert over one of the 2.x sub-sets (probably Masks).

So let me know what you think, and what you want me to work on next. I've got a doctor's appointment coming up in a bit so I'll be out til this afternoon, but I'll be sitting back down to draw then and will let your input decide what I do.

32 Responses to HM3: Get your head in the gear. Game. Whatever.