I am honored to welcome the fabulous "Amber Love" of the great "Amber's Fashion Tips for Superheroes" blog as the guest host for this week's Caption Contest. She's a natural for HeroMachine since she is the queen of super-hero costuming, and a funny writer to boot. She's selected the following caption to kick off Year Two of this weekly insanity: 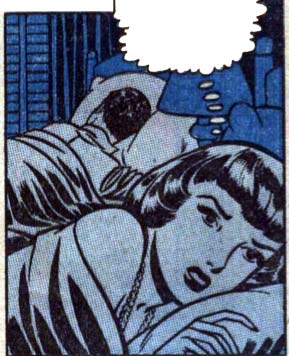 Next Tuesday she'll select the winning entry from those left in the comments to this post. With some trepidation, I'm going to go ahead and waive the "three entries per person" rule again this week, as I think last time had some great ones around that might not have made it otherwise. So enter as many times as you like, but do please try to keep them relatively clean, especially considering the subject matter of the panel in question. Ahem.

The winner, as selected by Ms. Love, will receive a free custom black and white illustration by Bertram-famous artist Jeff Hebert (that's me) OR (as someone suggested last time) they can instead choose a set of items to be included in HeroMachine 3. For example, the winner might decide that they want a set of "Three Musketeers" style swashbuckling adventure items -- a cool hat with a big feather in it, the classic draping poncho, the puffy-sleeved shirt, gloves, and floppy boots, along with the requisite rapier. They could choose that instead of a drawing, and that set of items would appear in HeroMachine 3.

So if you win, you might get to help shape the course of the greatest super-hero costume generator in HISTORY!! Plus, of course, you might impress the fabulous guest judge who, if I haven't said it before is a lovely woman who loves super-heroes, and impressing someone like that -- well, let's just say it's pretty much the Nerd Holy Grail.

So what are you doing still reading this, get into the comments and make with the funny! After, of course, visiting Amber's Fashion tips, that's key as well. I'm not saying she's going to know if you cam and read her site when she's picking the winner or anything, I'm just saying it can't hurt.