I wanted to show you some of the "Tops" items I've been working on for HeroMachine 3: 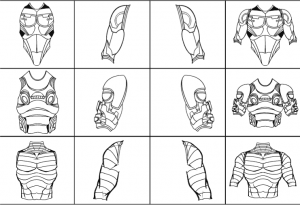 This is the second page of items; the first is all stuff from the Modern Warrior Mini, which you've already seen. Note that I've broken these items down into four types -- vest only, left arm only, right arm only, and complete item. I did this so that you could mix and match "sleeves" with various torso pieces. For instance, maybe you like the first chest piece, but you want to couple it with the big bulky arm pieces in the middle row. With these items broken apart, it's no problem.

I also wanted to include the completely assembled pieces for those who don't want to be bothered with selecting and coloring three different things, but who want just one to do it all. That works fine if you don't want to move the figure's arms, and more advanced users can easily hand-assemble the units they want.

I've been struggling mentally with how to organize all this stuff. Originally I was planning on having "Body" broken up into like seven different slots, including upper & lower arms, upper & lower legs, etc. But the more I got into it, the more it seemed like that would impose a high burden on the user to have to go through and pick all those pieces. I want HM3 to be just as easy to use as 2.x was for kids or lazy people (like me). Then I started thinking that having a bunch of "sleeves" in "Right Upper Arm" was overkill and confusing. If you're trying to dress a character, you're going to be looking where the rest of the shirt is, you know?

It's starting to look like "multiple items" is going to pretty much be a very necessary thing. Having the mini toolbars right there on each item preview makes this less of a pain than you might think, as you can cycle through items pretty easily, quickly getting rid of the ones that don't work.

I hope to have the alpha (it's not really even a beta yet) posted very soon so you can play around and see if this approach works in actual usage or not.