Review: Batman, The Brave and the Bold

Once again DC kicks Marvel's animated ass with its latest Caped Crusader television show, "Batman: The Brave and the Bold" on Cartoon Network. I don't know why DC can't make a decent live action film while Marvel's are awesome, but the reverse is also true -- I have yet to see a Marvel animated show I liked, while DC just keeps cranking out hit after hit.

And this one's no exception.

Taking a break from the Bruce Timm-designed "DC Animated Universe" style, "B:BB" hearkens back more to a Jack Kirby, square-jawed dynamic. This is super-heroes by way of "Raiders of the Lost Ark", non-stop action with just enough character and plot to keep you interested. The creative team has put together a very tight product, starting with the nifty device of an opening scene featuring a mini-adventure with Batman and some other character different than the episode's main "Guest Star". This confused me at first since I am, when you get right down to it, just barely above the "low-functioning imbecile" level on most standardized intelligence tests. I kept checking my TiVo to make sure I hadn't screwed up the times, accidentally recording the last minute of the previous episode. But once I figured it out, I really dug it, kind of like getting a super-cool toy in your box of Lucky Charms.

I also like the opening theme music, it's got a toe-tapping, hard-driving beat that keeps me socking bad guys all night long.

I can't believe I just wrote that sentence. 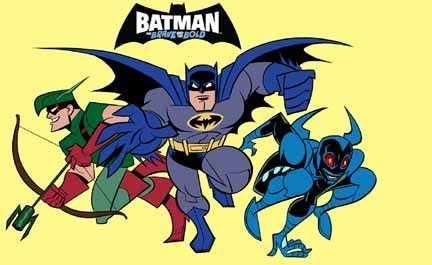 Moving on, like in the classic comics series, each episode of "B:BB" features Batman teaming up with another super-hero to tackle a case. Typically companies do this to give a boost to their B-list (or C-list, or in some cases -- I'm looking at you, Kamandi -- D-list) characters, hoping to drive sales a bit. But it also works from a story-telling perspective, letting someone else take the focus for a while so the writers don't constantly have to think of what else they can put poor Bruce Wayne through. Because honestly, after a bazillion comics and half a bazillion movies and a quarter bazillion animated series, the ground's been pretty well churned, you know?

Batman in this world is pretty much a Superman analog in terms of his sheer bad-assery and fame. Everyone knows him and wants to work with him, but he's clearly the top dog. You don't get much of the peripheral stuff in his life -- no Alfred or Robin or billionaire parties -- so you're dealing with pure, distilled Caped Crusader and whatever tagalong also-ran he's hanging with that week.

The stories are punchy and engaging, only occasionally too-preachy, and consistently fun. The art takes a little getting used to, but eventually you warm to it and really hooks you. I hope it has the same longevity the Timm-led series did, because I've enjoyed every episode a lot so far .

If you're not watching it, you've only got two new episodes left, so be sure to tune in on Fridays nights on Cartoon Network. Otherwise you might only have a hundred chances a day as, I am sure, they will run it into the ground like an Impala strapped to a Jet-Assisted Takeoff rocket.

14 Responses to Review: Batman, The Brave and the Bold