I have a suggestion -- the first guy this man ought to hunt down and kill is whoever designed his outfit: 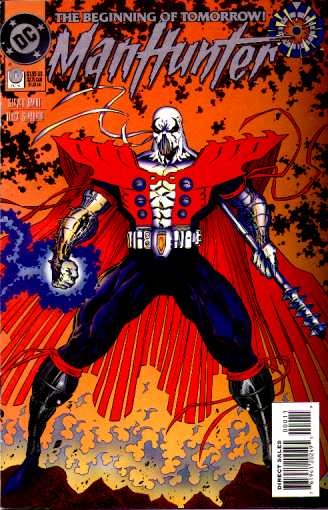 You can tell DC put this out during the Image-imitating Nineties, with the atrocious sausage-thighs, spittle-teeth, and oversized shoulder pads, but I think they really accomplished something new here. Specifically, a new low.

To start with, why does he have those unbelievably long ties flying out of the back of his head? Are they trying to tell us that all the teeth and the glaring and the eye mask bits and the neck -- sweet fancy Moses, the neck! -- are actually part of a hood and not his head? But if it's a hood, why does it have ties like a half-mask? Why isn't it stretched back towards the ties? How in the name of Top Model does it stay that tight across his face, to the point that we can see the sad-face frown lines creasing his worried brow?

Whatever, the important part is that the white flyouts match the equally ridiculous red flyouts on his biceps. Why does metal armor on your arms require a cloth sash, you might ask? Clearly the answer is STORMS ELECTRICITY FIRE METAL CLUB HAAAAA!

Which brings us to that vest. I've spent more time than I can bear to think about studying this thing, and I am still bewildered. It appears to be a massive pair of shoulder pads, flowing seamlessly into a very stiff vest which, nonetheless, flatly merges into a belt. Meanwhile the shoulder pads support a cape that apparently was caught in some sort of industrial shredder, and yet its tatters remain miraculously orderly. How that's possible, I frankly don't know, considering he's standing in a pit of fire in front of a raging nuclear hurricane.

What's truly remarkable is that the vestipadicape is in two separate pieces, held together only by one thin red strap across the chest. At first I thought there were laces running between those giant useless blue buttons, but on closer examination I think those are his abs. And diaphragm. And ... I don't know, extra Manhunter muscles or something, who the hell cares, once you've torqued up basic anatomy this badly you might as well really freestyle, right? I mean seriously, look at that left arm -- I can only surmise that the club is so heavy the arm has snapped at the elbow, causing the forearm to swell to Brobdingnagian proportions, an effect that has apparently schlumped into his legs.

Because the legs, those amazing Image-inspired Earl Campbell-like sausage stumps atop his feet ... oh my. I assume the red sashes on the shins are to keep all the liquid sludge from sliding down into his shoes. Plus it might put out the fire he's standing on, which would seriously crimp his macho style, dawg.

All I know is, Manhunter better have some serious agility and coordination, because otherwise he's going to accidentally strangle himself on one of those twelve foot sash ties he's got hanging from his shockingly distended body. He looks like Deadman ran head-first into a pinata.

And the pinata won.