Who doesn't love a good group scene? I know I do! Thus your challenge for this week's caption contest is from the pages of Image Comics' "Brigade", issue 2: 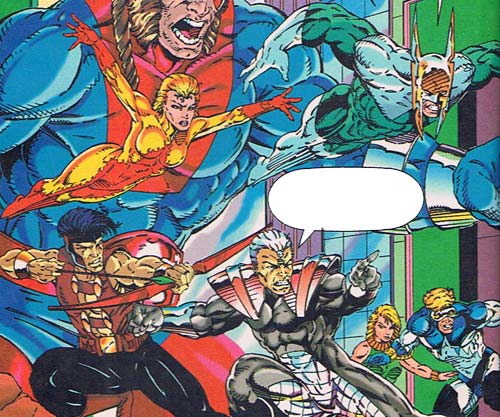 Come up with the funniest/best replacement dialog for the balloon and you'll receive a free black and white illustration of whatever you like from yours truly, so put on that thinking cap and get busy! Keep it to no more than three total entries per person, left in the comments to this post, and relatively clean and you’re home free.

(P.S. I can't post this image without pointing out that the artist is Marat Mychaels, who can only be described as a Liefeld Wannabe. In other words, he is an even worse illustrator than Rob, and yet someday aspires to be just like him. You can certainly see that wordless longing in the way the figures all seem to have their feet (off-panel, naturally) at different levels. Seriously, they'd all have to be standing on different stages for this to make sense. And the giant in the background either has his feet crammed into his buttocks or he's standing in a well. Which of the two foreground figures, and which of the two flying figures, is in front of the other? Can you tell? I can't. Add in the horrible coloring, the amateurish inking, and the awful character design, and you have the only thing worse than a pure Rob Liefeld drawing -- someone who wishes they were Rob Liefeld but isn't as talented as he is! Oy.)