His name is "Dreamkiller", and apparently the way he kills the most dreams is to draw pointed attention -- literally -- to his enormous crotch: 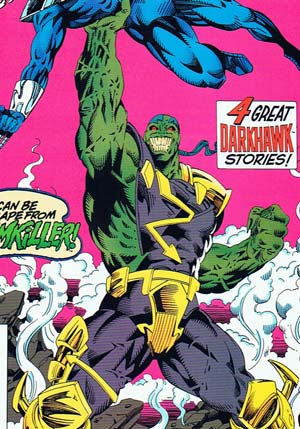 I can't fathom any other reason for that giant arrow squiggling down his chest to nestle gently yet irresistibly at the entrance to Man Town. It's not even a printed pattern on a shirt, that's a solid metal doohickey, presumably to ensure that it cannot be damaged easily in battle.

Taking that into account with the sleeveless tunic shirt, the blue skull cap/long flowing pony-tail hair combination (like a mullet gone terribly, terribly wrong), the rippling musculature indicating waaaaay too many hours in the gym, and the enormous glistening veneers on those chompers, I'm betting "Dreamkiller" really means "Ladykiller", the kind of guy who spends most of his time trying to convince anyone who'll listen that "It's not just padding in that metal dream hammock, honestly!"

I also love the big ol' honking metal boots with the spikes on the sides. How the hell do you walk in those things without the inside bars bashing against each other with every step? Answer: "When you look THIS good you don't have to walk -- they come to you."