If bad super hero costumes had a Hall of Fame, Image Comics would occupy almost every slot with their bewildering array of over-the-top, hacky sartorial disasters. Seriously, whenever I start to run low on mockable items for this blog, I go to Half Price Books and buy an issue -- any issue, and only one -- of an Image Comics title from the early Nineties. Which is exactly what I did with "Brigade" number 3, where I found this: 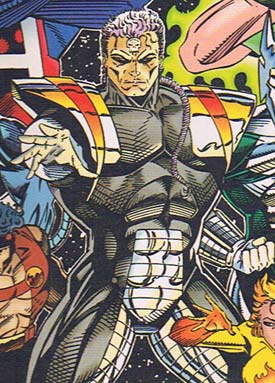 Battlestone is a virtual cornucopia of Image cliches. You've got the longer-on-top, wavy white hair combined with the excessively long braided rat-tail. You've got the large shoulder pads over partially armored body. You've got the anatomically-impossible sculpted abs, one armband dramatically bigger than the other, the itty-bitty hands, the appearance of a skull somewhere on the uniform (bonus points for putting it on his actual skull!), and of course the bulging, manly crotch being either stared at lustfully by someone else in the panel or with big long "background" lines pointing to it.

(Edited to Add: Plus look at how HUGE that groinal area is in relation to the figure of Thermal the flame girl, who in theory is IN FRONT OF him and therefore closer to us, the hapless viewer. That thing's bigger than her whole forearm and hand! And head!)

Combine that with his epitomization of "Image's Golden Rule of Naming Characters": Two words jammed together, at least one of which must be related in some way to bloody carnage. War-blade. Rip-claw. Death-blow.

Ok, that last one is actually from "Seinfeld", but it absolutely could have been a Nineties Image character, and you know it!

At least most of the word combinations make a vague sort of sense, but "Battlestone"? I'm supposed to be scared of slingshot ammunition? Particularly when paired with the shoulder pads' rainbow chrome effect and red stripe, he comes off less as intimidator and more as humorous sidekick. Especially when you see him from behind, when the awfulness of the outfit really shows: 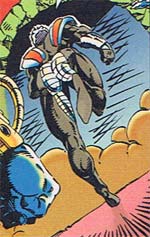 "Holy firmly rounded armored buttocks, Batman!" I guess that's one way to insure that you rarely run away. And if you do, that your backside will be -- literally -- covered.