While reading through one of the execrable "Millennium" issues the other day, I came across this character: 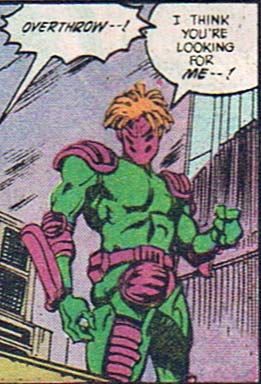 I drew up short for two reasons. One, I dare you to encounter a green and purple color scheme on a super-powered individual whose name is NOT "Kang" and take it in stride. And two, who the hell is Overthrow?

Look, I get it, these huge multi-book mult-issue mass crossover titles revel in throwing out completely obscure characters to titillate the hard-core fanboys, but Overthrow? Honestly? Even Blue Beetle, who's issuing the dialog from off-panel, seems stunned that such a random person is making an appearance, and the two of them go way back.

But I bet the reason you never really heard from Overthrow before or after this issue is his costume. In a word, it blows. Or in the words of Bart Simpson, it's achieved the seeming impossibility of both sucking and blowing at the same time. Besides the color scheme (which frankly is hard to get past, but I'll soldier on), I find it hard to take a guy seriously who got his hairpiece by mugging and subsequently scalping Carrot Top. Granted, that was a profound act of goodness for all humankind, but slapping that mop on top of a purple Round Table Helmet is just weird. I keep looking for the big red clown nose that surely just fell off that ensemble.

Due to the perspective of the figure (and the rubber-penciled efforts of Joe Staton) it's hard to tell what's going on with his crotch. (And by the way, if I had a dollar for every time a teenaged Jeff got the "What's going on with his crotch?" question I'd be a wealthy man right now.) Either that's a knee pad on top of a padded boot front, or this guy has serious ego problems.

I sure hope it's the latter, because a purple and green Carrot Top wannabe with a raging boner is just scary enough to get me reading further. Otherwise, it's just another sad, sad costume.

5 Responses to Overthrow him already, please!