I've been hard at work all week getting the new HM Mini (Modern Warrior) coded, and it's going really well. It's funny, I get the same glow from figuring out how to make something work in Flash as I do when I write a really good post, or complete a particularly nice illustration. I guess the creative buzz is the same no matter what gives rise to it.

Anyway, here's a screen grab of the program so far, with explanation to follow: 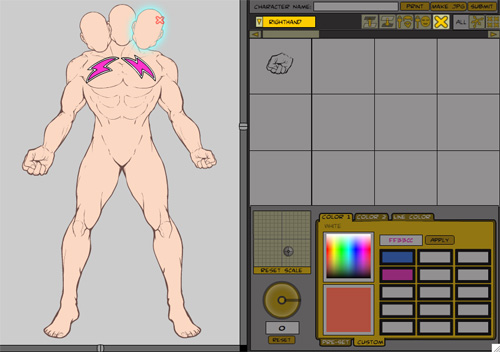 As you can see, I've added multiple "Head" items to the figure. Since I only have one Head drawn at the moment, you get Three-Headed Monty, but you can also see two versions of the lightning bolt insignia. I placed one, rotated it, moved it to the left a bit, then placed a new one and rotated it the other way, moving it a bit to the right. The effect is of double lightning bolts on the upper chest. I could have crossed them, too, for a lightning-bolt-X look.

Other items of interest, in no particular order:

My understanding of this new version of Flash (ActionScript 3) is growing exponentially with everything I do here. It's all starting to feel intuitive instead of having to slog and hack and piece my way through every single thing. As a result it's all going a lot faster, the code is a lot more elegant, and I've been able to figure out how to do some things I used to think weren't possible.

The long and short of it is, all of this code and effort I am putting into this are definitely going to pay big dividends when it comes to HeroMachine 3. I've already solved most of the major issues I was worried about. Once this is completed, the last big thing to tackle for HM3 will be allowing the user to load up sets of items on the fly, but I don't think that's going to be a huge deal.

Still to do as far as programming on the Modern Warrior goes are masking; enhanced layering controls; "flip" and "mirror" controls (turn the current item over either left-to-right or up-and-down); allowing the user to change color transparency; clear all; and randomize all. Then it's off to draw items in a frenzy!