Spymaster is a Marvel villain who's had several incarnations, with the first one being the most unfortunate, costume-wise: 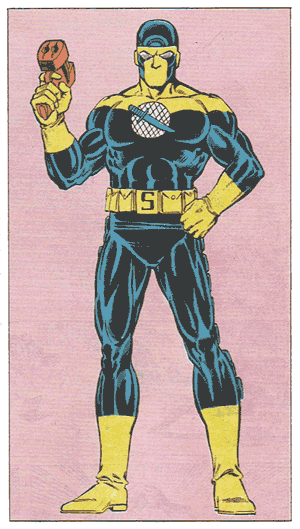 Let's say you want to be a master of industrial espionage, someone whose mission it is to infiltrate the most secure locations in the world undetected, and you're trying to decide on your costume's color scheme. You first settle on lots of blackish-blue, which makes sense as you'll be skulking in a fair number of shadows. But let's see, what accent color should we choose? Something subtle, something that says "Don't look over here, nothing to see!", something that's ... yellow! Bright, cheery, neon yellow! You know, like canaries use to stand out from the riot of colors in a jungle when they're trying to attract a mate.

So now you're in your very inconspicuous black and electric yellow, and it's time to accessorize. But you're not sure what to pack, because hey, multiple targets and challenging security systems and whatnot, right? In which case you pack your handy-dandy "Electric Plug With a Handle". That way, no matter what appliances you might encounter during your nocturnal espionage, you can plug them right in. There's nothing worse than midnight corporate skullduggery interrupted by a Mr. Coffee that's got no juice.

Now you're almost set, but before you can start your super villainous career you really need a logo, something that makes you stand out, because if there's one thing a spy desperately craves it's to be instantly recognizable to anyone who somehow penetrates the sun-like glare of your color scheme.

Of course you must keep in mind that you're a high-tech spy, not some mundane little third-world CIA hack. So naturally you choose a kitchen knife for the primary element of the logo, as nothing says "Silicon Valley" like an apple corer. Then, to set it off, you put it over a world-shaped blob with lines all over it, to signify that while you're aware there are such things as longitudes and latitudes, you're not actually in on where all those continents and stuff are. Better just to make it all "ocean" and let someone else figure out the details. I mean, that's why they make spy secretaries, right?