Posted on August 20, 2008 by AFDStudios | Comments Off on Simple weapons for simple villains

When it comes to bad super costumes, you can't limit yourself to just the actual uniform. Weapons count too, which is why I adore "Psychoman" so much: 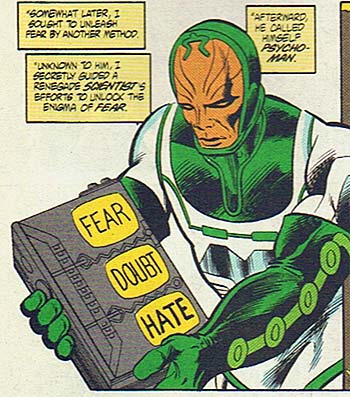 Granted, he doesn't look all that bright, so maybe simpler really is better in this case. It certainly cuts down on the size of the decision tree he needs to consider during battle. "Hmm, I'm about to get smacked in the face by The Hulk. Perhaps he needs a generous dose of HATE! No, wait, that would be counter-productive. A healthy bout of self-doubt as to whether his massive green thews can truly smash my orange shiny head? I'm already afraid so that's out. Decisions, decisions..."

You can tell how confident his secret creator is about Psychoman's cognitive acumen by the dialog. "Unknown to him, I secretly guided a renegade scientist's efforts to unlock the enigma of fear." That's some enigma there, very difficult to unlock. Now I'm no scientist but I'm going to go out on a limb here and guess you'd press that gigantic button marked "fear" to unlock that particular enigma. I'm surprised they were brave enough to put three buttons on the giant box instead of just one marked "PRESS HERE DUMMY!"

Speaking of which, I love the size of the buttons. There's nothing worse in the middle of a super battle than to accidentally press the wrong button and enrage the crowd you're trying to disperse fearfully. Plus, the way he's holding it, so tenderly, it makes me wonder if there's not a "Technophile" button on the back of the thing set permanently to "on". Because you should love your gadgets but don't, you know, love your gadgets.