Gay Batman or Vampire Liberace? We report, you decide!

I'm not sure what exact number it is, but somewhere on the "Big List of How To Make a Bad Super Costume" is "Make the whole thing pink and purple." For any questions regarding this vital tip, I point you to either Hawkeye or Dr. Strange's brother, the vampire: 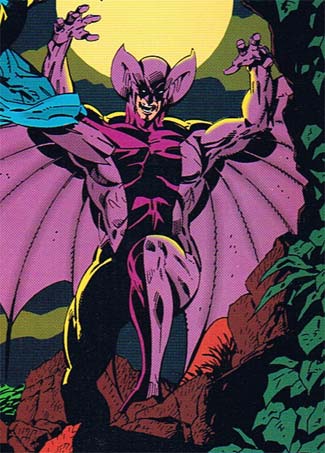 Now, in his defense, this guy was being mind-controlled by an immortal voodoo queen at the time. But still, even mind-controlled voodoo vampires have pride, or ought to. Besides the ghastliness of the color scheme, you have to wonder why a vampire -- who, let's not forget, can actually turn into a real bat! -- would need to dress up as a bat when in human form. Because if he wanted to look like a bat, wouldn't he just, you know, turn into a frigging bat?! The giant fake ears, the giant fake wing/cape, it's all unnecessary. It makes you wonder if, in his bat form, he wears a tiny little tuxedo and Count Dracula cape. "Look at me!" he would squeak, "I'm a human!"

Maybe the outfit is supposed to stun his victims, who would be torn between horror at the creeping undead about to consume them and convulsive laughter at the pink and purple big-eared Mardi Gras costume it was wearing.

9 Responses to Gay Batman or Vampire Liberace? We report, you decide!